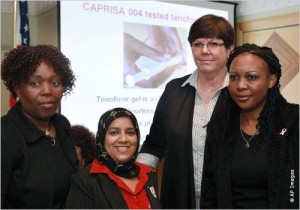 Washington — A gel that may be able to reduce the risk of infection by the human immunodeficiency virus (HIV) offers new hope and direction for HIV prevention, according to the United States global AIDS coordinator.

A study of 889 women in Durban, South Africa, has shown that a microbicide gel containing an antiretroviral drug can reduce the risk of contracting the virus that causes AIDS.

A microbicide is any substance that reduces the infectivity of living organisms called microbes, which include bacteria and viruses. This is the first time that a microbicide has been shown to be safe and acceptable for use against HIV transmission.

The microbicide contained 1 percent tenofovir ? an antiretroviral drug widely used in treating HIV ? and was 39 percent effective in reducing a woman’s risk of becoming infected with HIV during sex. It was also 51 percent effective in preventing genital herpes, a common viral, sexually transmitted infection that increases the risk of HIV infection.

The trial was conducted by a consortium that includes the Centre for the AIDS Programme of Research in South Africa (CAPRISA) at the University of KwaZulu-Natal in Durban, Family Health International (FHI) of North Carolina and CONRAD, a division of the Department of Obstetrics and Gynecology at Eastern Virginia Medical School.

The study, called CAPRISA 004, was funded by the U.S. Agency for International Development (USAID) and TIA, a biotechnology agency of the South African government’s Department of Science and Technology. California biopharmaceutical firm Gilead Sciences provided the tenofovir for the proof-of-concept clinical trial.

“The results of the CAPRISA 004 trial provide new hope and direction not only for HIV prevention but also broader efforts under the U.S. Global Health Initiative,” Dr. Eric Goosby, the U.S. global AIDS coordinator, said in a July 19 statement.

“These results are an important first step toward establishing the effectiveness of using antiretroviral drugs to prevent HIV infection,” USAID Administrator Rajiv Shah said in a July 19 statement.

“After the results are confirmed in an ongoing and similar study supported by the National Institutes of Health in the U.S. Department of Health and Human Services, as well as other studies,” Shah added, “we will work with partners at the global and country levels to integrate this product into our programs,” including PEPFAR, the President’s Emergency Plan for AIDS Relief.

According to a statement by the World Health Organization and the Joint United Nations Programme on HIV/AIDS, nearly 20 years of research have gone into microbicides that can be controlled by a woman, independent of her partner.

About half of all people living with HIV are women. In Africa, according to FHI, women and girls account for about 60 percent of new HIV infections. Correct and consistent use of male condoms has been shown to prevent HIV infection, but women may not be able to convince their male partners to use condoms.

“The daunting nature of the HIV/AIDS pandemic makes it clear that no single organization can tackle the problem alone,” Dr. Anthony Fauci, director of the National Institute of Allergy and Infectious Diseases (NIAID), part of the U.S. National Institutes of Health, said in a July 20 statement.

“The CAPRISA 004 study,” he added, “is an excellent example of what researchers, governments, countries, industry, communities and individual study volunteers can accomplish when working together to find public health solutions.”

If other studies of tenofovir gel confirm these results, widespread use of the gel, at this level of protection, could prevent more than half a million new HIV infections in South Africa alone over the next decade.

Building on the CAPRISA research to identify an effective microbicide for women and others at high risk for HIV infection, NIAID sponsored a study that launched in 2009 called Vaginal and Oral Interventions to Control the Epidemic (VOICE).

VOICE, expected to enroll 5,000 women in four countries in southern Africa, will provide more data on the safety and effectiveness of a tenofovir-based vaginal gel. The study also will try to determine whether users would prefer to apply the gel once a day rather than before and after sexual intercourse.

The VOICE study is also examining oral antiretroviral tablets (tenofovir alone or tenofovir plus emtricitabine, another medication that slows the spread of HIV in the body) to prevent HIV transmission. The first results are expected early in 2011, Fauci said.

U.S. Reaffirms Its Commitment In Global Fight Against HIV/AIDS

Use of Generic Antiretroviral Drugs and Cost Savings in U.S. HIV Treatment Programs

DipNote: An Update From The International AIDS Conference in Vienna