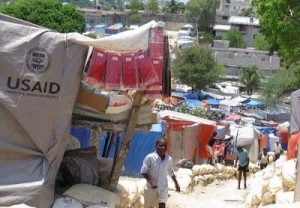 Washington — While longer-term planning is under way for Haiti’s reconstruction, an aggressive effort is being made to prepare Haitians for potentially severe tropical storms and a dangerous hurricane season, as well as the flooding and landslides that accompany them, a senior U.S. development official says.

Most people living in the Port-au-Prince region, the area most devastated by the January 12 earthquake, are at greatest risk from the rains and flooding that come with the storm season in the Caribbean, says Paul Weisenfeld, Haiti Task Team coordinator for the U.S. Agency for International Development (USAID).

“The concern has been directed at leveling ground, distributing gravel, clearing drainage canals, building ditches so that water can be channeled, so that we reduce the risks of flood,” Weisenfeld said at a Washington Foreign Press Center briefing on Haiti at six months. “It was a large effort and a lot of money has been spent on that, and that’s an ongoing effort.”

While planning continues for rebuilding Port-au-Prince and the other areas damaged by the magnitude 7.0 earthquake, work also has to be done to prepare the survivors and those displaced by the earthquake for what may come in the form of tropical storms and hurricanes.

“We are also trying to get people into shelters. That obviously is the better medium to long-term solution,” Weisenfeld said July 19.

Weisenfeld told reporters that planning for the storm season began in April with United Nations agencies and the U.S. Defense Department when military units were still working on the recovery phase. Part of the effort was to identify the displaced camps that were most at risk for flooding and landslides.

Approximately 7,500 people were moved to higher ground. A number of engineering fixes were made at other camps, about 20 in total, to reduce their risk for flooding and landslides, Weisenfeld said.

“Any kind of major storm passing through the city of Port-au-Prince, when you have a displaced population that large, is extremely worrisome,” he said.

The other half of the overall problem is the reconstruction effort, Weisenfeld said. World Bank economists estimated that it would take seven to 10 years to fully rebuild Port-au-Prince and the surrounding areas. Weisenfeld said it is obvious that reconstruction to make Haiti better than before the earthquake is a multiyear effort.

Long-term sustainability requires working through the Haitian government and institutions, he added.

“Obviously, [the government has] been weakened tremendously by this earthquake, so at the same time that we implement reconstruction programs, we need to strengthen government institutions so that we can work through them,” he said.

USAID, U.N. aid groups and the nongovernmental organizations that are working together are looking at ways to employ new technologies to be more innovative in reconstruction and to “help Haiti leapfrog its current technological status,” Weisenfeld said. One example recently launched is mobile banking in conjunction with the Bill and Melinda Gates Foundation.

A similar program has been used in Kenya and the Philippines. “Haiti is a country where prior to the earthquake 90 percent of Haitians never had access to banking services or never used a bank,” Weisenfeld said, “but Haitians have large access to mobile phones.”

“If people have banking services and they can make payments easier and start to save money, it reduces costs and improves the efficiency of the system and basically helps people advance more economically.”

Housing is critical to helping Haitians re-establish their lives and livelihoods, Weisenfeld said, as is feeding the population and maintaining a productive agricultural sector. Seeds and fertilizers were distributed to Haitian farmers so they could plant their crops on schedule and keep the country from spiraling down into a cycle of food insecurity.

Providing transition housing is now under way and funding was provided for at least 7,500 houses, Weisenfeld said. The international community, including the United States, has provided about 5,000 houses from that total. An assessment by engineers of about 170,000 houses and buildings in the Port-au-Prince area found 46 percent to be habitable, which was a welcome surprise, Weisenfeld said.

Some of the housing was immediately available, some required minimal reconstruction and others will require more extensive work. Grants have been made to get the reconstruction work on houses going, Weisenfeld said.

“So getting that work done and getting people to move back to the community is going to be a large effort,” Weisenfeld told reporters.

Rebuilding A School And A Society