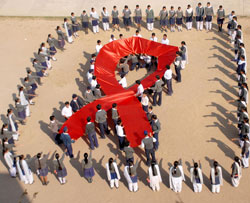 GENEVA, July 15, 2010 – The United States remains the leader in the global fight against HIV/AIDS, funding more than a quarter of the international financing for the disease.

President Obama has undertaken a comprehensive Global Health Initiative (GHI) to help partner countries improve the health of their people through an integrated approach that recognizes that PEPFAR is central to fulfilling Millennium Development Goals (MDGs 4,5,and 6)

The success of PEPFAR and other programs has been key to progress not only on MDG 6 (Combat HIV/AIDS, Malaria, and other Diseases), but also on MDG 4 (Reduce Child Mortality) and 5 (Improve Maternal Health).

Effective programs have saved women’s and children’s lives directly through prevention of mother-to-child HIV transmission and access to HIV treatment and care, and also by establishing health systems and community-based programs that deliver a broad range of health services.

Even as the President requested an increase in funds for PEPFAR in both his FY 2010 and FY 2011 budgets, the U.S. recognizes that the metric for success is not money spent but lives saved. The number of people directly supported on treatment increased in FY 2009 from approximately 1.6 million to nearly 2.5 million. The number supported in FY 2010 and coming years will continue to grow toward the GHI’s stated goal of treatment for more than 4 million.

PEPFAR is building on key lessons learned to date in terms of focusing on prevention, using resources wisely to increase impact, and pursuing a woman- and girl-centered approach.

PEPFAR partners with USAID, HHS, the Peace Corps and other agencies by mobilizing resources and expertise to support the global fight against HIV/AIDS in the field.