Under Secretary Burns On Iran Policy In The Aftermath of UN Sanctions
By U.S. Mission Geneva
10 MINUTE READ 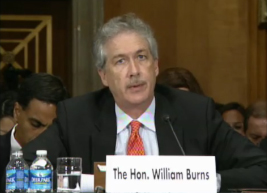 Under Secretary for Political Affairs

Chairman Kerry, Senator Lugar, Members of the Committee: Thank you very much for the opportunity to appear before you today.

The passage of United Nations Security Council Resolution 1929 two weeks ago establishes the most comprehensive international sanctions that the government of the Islamic Republic of Iran has ever faced. It reinforces the determination not only of the United States, but of the rest of the international community, to hold Iran to its international obligations, and to prevent it from developing nuclear weapons. At this critical moment, as we vigorously implement resolution 1929 and use it as a platform on which to build further measures by the European Union and other partners, it’s important to take stock of what’s at stake and where we go from here.

Let me start with the obvious: a nuclear-armed Iran would severely threaten the security and stability of a part of the world crucial to our interests and to the health of the global economy. It would seriously undermine the credibility of the United Nations and other international institutions, and seriously undercut the nuclear non-proliferation regime at precisely the moment we are seeking to strengthen it. These risks are only reinforced by the wider actions of the Iranian leadership, particularly its longstanding support for terrorist groups; its opposition to Middle East peace; its repugnant rhetoric about Israel, the Holocaust, and so much else; and its brutal repression of its own citizens.

In the face of those challenges, American policy is straightforward. We must prevent Iran from developing nuclear weapons. We must counter its other destabilizing actions in the region and beyond. And we must continue to do all we can to advance our broader interests in democracy, human rights and development across the Middle East. President Obama has made clear repeatedly, including in his statement on the adoption of resolution 1929, that we will stand up for those rights that should be universal to all human beings, and stand with those brave Iranians who seek only to express themselves freely and peacefully.

We will also continue to call on Iran to release immediately Shane Bauer, Sarah Shourd, and Josh Fattal, and all other unjustly detained American citizens. And we continue to call upon Iran to determine the whereabouts and ensure the safe return of Robert Levinson.

We have pursued our broad policy goals over the past 18 months through a combination of tough-minded diplomacy – including both engagement and pressure – and active security cooperation with our partners in the Gulf and elsewhere. We have sought to sharpen the choices before the Iranian leadership. We have sought to demonstrate what’s possible if Iran meets its international obligations and adheres to the same responsibilities that apply to other nations. And we have sought to intensify the costs of continued defiance, and to show Iran that pursuit of a nuclear weapons program will make it less secure, not more secure.

Last year, we embarked on an unprecedented effort at engagement with Iran. We did so without illusions about whom we were dealing with, or the scope of our differences over the past thirty years. Engagement has been both a test of Iranian intentions, and an investment in partnership with a growing coalition of countries deeply concerned about Iran’s nuclear ambitions. We sought to create early opportunities for Iran to build confidence in its intentions. In Geneva last October, we supported — along with Russia and France — a creative proposal by the International Atomic Energy Agency to provide fuel for the production of medical isotopes at the Tehran Research Reactor. Unfortunately, what appeared to be a constructive beginning in Geneva was later spurned by the Iranian leadership. Instead, Iran pursued a clandestine enrichment facility near Qom; announced plans for ten new enrichment facilities; flatly refused to continue discussions with the P5+1 about international concerns about its nuclear program; provocatively expanded enrichment to 20%, in further violation of UN Security Council resolutions; and drew new rebukes from the IAEA in the Director General’s most recent report a few weeks ago.

Iran’s intransigence left us no choice but to employ a second tool of diplomacy, economic and political pressure. Passage of resolution 1929 is the essential first step in that effort. The provisions of 1929 go well beyond previous sanctions resolutions. For the first time, it bans significant transfers of conventional weapons to Iran. For the first time, 1929 bans all Iranian activities related to ballistic missiles that could deliver a nuclear weapon. For the first time, it imposes a tough framework of cargo inspections to detect and stop Iran’s smuggling and acquisition of nuclear materials or other illicit items. It prohibits Iran from investing abroad in sensitive nuclear activities, such as uranium mining. It creates important new tools to help block Iran’s use of the international financial system to fund and facilitate nuclear proliferation. For the first time, it highlights formally potential links between Iran’s energy sector and its nuclear ambitions. And it targets directly the role of the Islamic Revolutionary Guard Corps in Iran’s proliferation efforts, adding fifteen specific IRGC entities to the list of designations for asset freezes.

Resolution 1929 provides a valuable new platform, and valuable new tools. Now we need to make maximum use of them. My colleague, Bob Einhorn, will lead this effort for the State Department. He’ll work closely with Under Secretary Levey, whose own leadership on these issues for a number of years has been extraordinarily effective. Already, the European Union has acted strongly to follow up 1929. Its leaders decided last Thursday to take a series of significant steps, including a prohibition of new investment in the energy sector and bans on the transfer of key technology, and tough measures against Iranian banks and correspondent banking relationships. Australia has indicated similar resolve, and other partners will follow suit shortly. Meanwhile, as Stuart will discuss in more detail, we continue to have success in persuading a whole variety of foreign companies that the risks of further involvement in Iran far outweigh the benefits. As you know, the Administration has been working closely with the Congress to help shape pending legislation so that it maximizes the impact of the wider international sanctions that we are putting in place.

The net result of this combination of economic pressures is hard to predict. It will certainly not change the calculations of the Iranian leadership overnight, nor is it a panacea. But it is a mark of their potential effect that Iran has worked so hard in recent months to avert action in the Security Council, and tried so hard to deflect or divert the steps that are now underway. Iran is not ten feet tall, and its economy is badly mismanaged. Beneath all their bluster and defiant rhetoric, its leaders understand that both the practical impact of resolution 1929 and its broader message of isolation create real problems for them.

That is particularly true at a moment when the Iranian leadership has ruthlessly suppressed, but not eliminated, the simmering discontent that bubbled over so dramatically last summer. Millions of Iranians went to the streets last June, and in smaller numbers over the course of the ensuing months, with a simple but powerful demand of their leaders: that their government respect the rights enshrined within its own constitution, rights that are the entitlement of all people – to voice their opinions, to select their leaders, to assemble without fear, to live in security and peace. A government that does not respect the rights of its own people will find it increasingly difficult to win the respect that it professes to seek in the international community.

Sanctions and pressure are not an end in themselves. They are a complement, not a substitute, for the diplomatic solution to which we and our partners are still committed. We continue to acknowledge Iran’s right to pursue civilian nuclear power. But with that right comes a profound responsibility to reassure the rest of the international community about the exclusively peaceful nature of its intentions. Facts are stubborn things, and it is a striking fact that Iran is the only NPT signatory in the world today that cannot convince the IAEA that its nuclear program is intended for purely peaceful purposes.

The Foreign Ministers of the P5+1 countries made clear in the statement they issued on passage of resolution 1929 that we remain ready to engage with Iran to address these concerns. EU High Representative Ashton has written to her Iranian counterpart to convey this readiness directly. We have joined Russia and France in expressing to IAEA Director General Amano a number of concerns about Iran’s latest proposals on the Tehran Research Reactor, and the TRR remains a potential opportunity in the context of the broader P5+1 efforts to address Iran’s nuclear program. The door is open to serious negotiation, if Iran is prepared to walk through it.

The road ahead will not be easy, and the problems before us posed by Iran’s behavior are urgent. But there is growing international pressure on Iran to live up to its obligations – and growing international isolation for Iran if it does not. Resolution 1929 helps significantly to sharpen that choice. We will work very hard to implement and build upon it. We are absolutely determined to ensure that Iran adheres to the same responsibilities that apply to other nations. Too much is at stake to accept anything less.