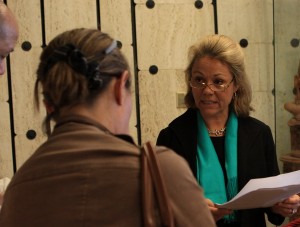 “Today’s joint statement on the human rights situation in Iran is a significant accomplishment for the Human Rights Council. Fifty-six states from every region of the world came together in this joint statement of solidarity with the Iranian people, bringing much-needed focus and world attention to the human rights conditions in Iran.  (Link to Text of the Statement)

This joint statement is an important moment at the Human Rights Council, as it honors the courage of the Iranian people. The brutality and violence committed by the Iranian regime against human rights defenders and peaceful protestors is appalling. Some of the stories I have heard by survivors of this brutality have been heartbreaking. But the courage of the Iranian people is remarkable. Their natural desire for liberty and intellectual freedom should never be doubted or underestimated.

I am very proud that the United States and our partners were able to build on strong partnerships to forge a strong cross-regional coalition in support of this statement. American engagement and leadership matters at the Human Rights Council. Without US engagement here – we leave a vacuum of leadership – which will get filled by the priorities of others. Expressing deep concern about the human rights situation in Iran is a priority for the United States. We are obviously not alone in that priority – as you can see from the commitment of the 56 other nations who joined us today in the statement read by Norway. Everyone knows that the U.S. has been working to address the question of Iran’s nuclear ambitions. It is very important for the world to know – and especially for the people of Iran to know, that President Obama is extremely concerned about the human rights situation inside Iran. Today’s success in the Human Rights Council is a testament to the multiple dimensions of US leadership, as well as the very strong partnerships we have with other leaders throughout the world. The joint statement also provides a hint of what is possible in the future of this Council in terms of its ability to address the most pressing human rights matters in real time, in a cross regional and constructive manner.

The Iranian regime has systematically worked to shut down news about peaceful political protests and human rights advocacy in Iran, by throwing journalists into jail and shutting down independent media, blocking internet sites, interrupting Twitter and Facebook accounts. Brave and vocal human rights defenders are targeted and intimidated, and even killed. Iran now apparently has more journalists in jail than any other country in the world.

Because of this suppression of free speech – the protests commemorating the anniversary of the contested June 12 election seemed relatively muted. However, it is important that the world not be fooled, or miss the truth here. The Iranian people have not and will not give up resistance to their own government’s brutality and oppression against them. We keep hearing a phrase that captures the feeling of what is actually going on in Iran: It’s “fire under the ashes.” Those of us in the Human Rights Council who have spoken today in support of the Iranian people are honored to stand up with them in defense of their liberty. “