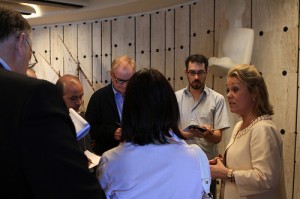 Ambassador Donahoe: I think you all heard the perspective of the United States and perhaps you’re all interested in how this relates to what transpired in New York yesterday.

I think it’s really important to underline the fact that from our perspective Iran is in violation of its international responsibilities on at least two fronts.  One is the nuclear material matter and the other is human rights matters.  And our team in New York is there to handle the first issue. Our job here is to bring attention to Iran’s failure to live up to its international responsibilities with respect to human rights.

I have to also emphasize that we are very pleased that Iran was willing to participate at all in the UPR process.  In fact the UPR process has been an incredible success for the Human Rights Council in that it has in fact been universally accepted.  Every country to date has been willing to engage in the process of reflecting on its own human rights record.  And we are very proud of that and very pleased with that response.

Again, in the case of Iran, we applaud the willingness to participate at all.

Unfortunately, as you have seen even though a good number of the recommendations that were put forth, I believe it was something like 123 out of 180, but you can check the exact numbers, Iran explicitly did accept, and the problem from our point of view is empty promises are not enough.  It is time for Iran to actually do something with respect to the human rights situation.

We are no longer willing to stand by and allow empty rhetoric to convince others around the world.  We have to shine a light on the facts on the ground and come back with our own rhetoric that is based on the truth.  That’s what we’re trying to do.

I’d also note — and there are many other recommendations that the Iranians explicitly rejected, so those are obviously points of contention with us.

I guess I’ll leave it there.

Question: Ambassador, what I understood from your statement and from your speech now, that the United States is satisfied of the Iranian response to the UPR.

Ambassador Donahoe: We are, or are not?

Question: Satisfied.  You are satisfied.  I am right?

Ambassador Donahoe: No.  What I have said is that we’re pleased that at least they were willing to show up.  This was in March, February, to give the perception that they were willing to engage.  But what we’re trying to call attention to is that just that showing up and saying that they accept recommendations, we don’t feel proves that they actually will do something about the recommendations.  We’re saying it’s no longer enough for the rest of us to accept their words on its face.  That we now have to demand action, because if the Iranians say that they’re going to respect free speech, free press, freedom of religion, I would argue the facts do not support those words.

So I would recommend that all of us now bring attention to their actions, rather than their words.

Question: From the point of view of the Iranians they say that the international community puts unusually challenges in front of the Iranian government and they could not start, they don’t know from where they could start.  There is challenges in the nuclear issue and there is now a second challenge in the human rights issue and the international community don’t give any [inaudible] for the UN or don’t help them. How do you comment on this point?

Ambassador Donahoe: I would say of all people it is my President who has given the Iranian regime so many chances to engage.  On the nuclear front he was very clear that he was willing to sit down.  He got a lot of criticism for taking that stance, and I think he has gone above and beyond in that regard.  I think the international community has over and over and over again tried to respect the right of all countries to have peaceful nuclear programs, but not allowing the spread of nuclear weapons.  And the Iranian regime has chosen not to accept that openness to engagement.

In the human rights case, which is our focus, it is even more true that the international community has tried on every occasion to provide support.  It’s not a matter of capacity.  We are willing to go in and give capacity, monitoring, any kind of support needed, but the fact is the special rapporteurs, who the Iranians said they would accept, have been prevented from entering —

Ambassador Donahoe: Seven.  So that’s a great example of where words don’t meet the truth.  They have said that they would allow monitoring, they have invited the High Commissioner’s office to come in.  And yet it has not happened.

Question: Are you concerned that possibly sanctions might make the Iranians less willing to cooperate with the international community also on the human rights front?

Ambassador Donahoe: When you say the Iranians, you mean the Iranian —

Ambassador Donahoe: So do I think that the sanctions issue will negatively affect cooperation?  I really can’t speculate on what might get the Iranian government to cooperate on any subject.  But I can say international awareness of and international pressure on the human rights reality on the ground is the single most high impact way to influence what’s happening with respect to human rights.  If anything, my speculation would be that the sanctions conversation and the nuclear conversation would help us because the Iranian regime will see that it is becoming more and more isolated around the world on every subject.

We have documentation from many of the very impressive NGOs on the ground in Iran that have convinced us that the single most important thing we can do is shine a light on what’s happening because that is what puts pressure on the Iranian government.

Voice: The Ambassador needs to get back into the meeting but I just wanted to mention that tomorrow she will be attending a special session here with human rights defenders from Iran and she will be there and we’ll be available if any of you happen to be covering that.  It’s from 1:30 to 3:00.  It’s in this building.

Ambassador Donahoe: I have to tell you, the people who have organized it are top notch professional, everything they do and say is documented. It is at the caliber of the Nobel Laureate Shirin Ebadi, so they’re not making wild accusations.  These are documented cases of very bad abuses.  I think that they deserve our attention, our time, and I hope that you will all think it’s worth your energy to come and hear their stories.

Voice: It’s not an event we’re sponsoring.  It’s sponsored by a group of NGOs, but we’re going to be there.

Ambassador Donahoe: I’m going as a citizen to listen and hear some of the facts.