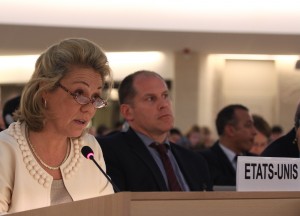 Statement of the Delegation of the United States of America

(As Prepared for Delivery)

Thank you, Mr. President. The United States notes with concern Iran’s presentation during its Universal Periodic Review and the disturbing lack of progress since then in strengthening the protection of human rights in Iran. Although Iran highlighted its variety of traditions as “a model of brotherly and amicable coexistence,” arrests of religious minorities have increased in the past year and seven Baha’i leaders are currently on trial for crimes against the state. In its response, Iran rejected the recommendation to end discrimination against adherents to the Baha’i faith. Iran highlighted its cooperation with OHCHR and invitation to all thematic special procedures. The United States, however, notes that no visits by Special Rapporteurs and other mandate holders have occurred since 2006 despite many attempts and requests. We urge Iran to cooperate with the Special Procedures and to follow through on its recent promise to welcome a visit by the OHCHR under appropriate conditions.

We note Iran’s acceptance of many important recommendations from the international community during its UPR, including to allow freedom of expression, freedom of the media, and of assembly – and we call on the Government of Iran to live up to and implement these commitments. We strongly support the detailed recommendations from nations around the world calling for Iran to uphold its international commitments with respect to freedom of expression, protection of religious minorities, and freedom from arbitrary detention. To date it has failed to do so. Empty promises are not enough; Iran needs to act.

Mr. President, as you know, on June 12, we will mark the one year anniversary of the terrible events that occurred after Iran’s contested election, when tens of thousands of Iranians– exercising the right to peaceful free expression — marched through the streets. As President Obama stated yesterday, “Saturday will mark one year from the day that an election captivated the attention of the world – an event that should have been remembered for how the Iranian people participated with remarkable enthusiasm, but will instead be remembered for how the Iranian government brutally suppressed dissent and murdered the innocent, including a young woman left to die in the street.” The violent response to these peaceful protestors and subsequent crackdown on peaceful expression were mentioned nowhere in Iran’s accounting of its human rights record. We urge the government of Iran to uphold all of its international commitments and to account honestly for its human rights record, particularly over the past year. We take this opportunity to express our solidarity with the people of Iran who have suffered abuses seeking to exercise their universal human rights.