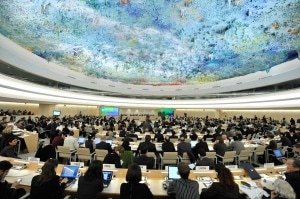 Statement by the Delegation of
the United States of America

Explanation of Vote: The Grave Attacks by Israeli Forces Against the Humanitarian Boat Convoy

We regret having to call a vote and vote no on this resolution.  It is our hope that, over time, this Council will be able to unite around balanced and appropriate responses to urgent situations that deserve our attention.  We have engaged intently in discussions here in Geneva and in forums around the world in response to the events addressed in this resolution, and are deeply committed to working with partners to ensure a full and appropriate response to this incident and the circumstances that led to it.

As noted in our statement in this chamber yesterday, the United States is deeply disturbed by the recent violence and regrets the tragic loss of life and injuries suffered among those involved in the incident aboard the Gaza-bound ships.  We condemn the acts that resulted in the loss of at least ten lives and many wounded, and we express our condolences to their families.

We call attention to the  Security Council statement adopted on June 1.   It is important to ensure a prompt, credible, impartial, and transparent investigation. Israel has a very strong interest in conducting such an investigation that meets international standards and exposes all the facts. There are, of course, a number of ways to ensure such an outcome.

The United States continues to be deeply concerned by the suffering of civilians in Gaza and the deteriorating humanitarian and human rights situation there.  The situation in Gaza is unsustainable and unacceptable.  In line with the Security Council statement adopted yesterday, we stress the need for sustained and regular flow of goods and provision and distribution of humanitarian access throughout Gaza, and we will continue our work towards this end while bearing in mind the Government of Israel’s legitimate security concerns.

In the context of today’s debate, it is important to once again stress that the only viable solution to the Israeli-Palestinian conflict is an agreement, negotiated between the parties, that ends the occupation that began in 1967 and fulfills the aspirations of both parties for independent homelands through two states for two peoples, Israel and an independent, contiguous, and viable state of Palestine, living side by side in peace and security.

Unfortunately, the resolution before us  rushes to judgment on a set of facts that, as our debate over the last day makes clear, are only beginning to be discovered and understood.  It creates an international mechanism before giving the responsible government an opportunity to investigate this incident itself and thereby risks further politicizing a sensitive and volatile situation.  We understand the impetus to respond quickly to a troubling set of events.  But we have an obligation to determine facts and make considered judgments on how to best address what is a complex and difficult situation.

For these reasons, we must vote against this resolution.