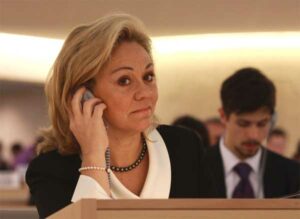 Item 2: Annual Report of the High Commissioner for Human Rights and Reports of the OHCHR and SYG

Thank you, Mr. President. The United States recalls the courage of those who stand to defend and promote human rights and fundamental freedoms, and we take this opportunity to again applaud and convey our appreciation of the essential work of the Office of the High Commissioner for Human Rights and its field missions. We commend High Commissioner Pillay’s work to support international human rights bodies and mechanisms, to monitor and draw attention to human rights problems, and to strengthen human rights institutions, laws and policies at national level. In that vein we encourage visits by the OHCHR to Iran under appropriate terms that will allow the office to carry out its work, to monitor the human rights situation and meet with the courageous individuals who are simply calling for their universal rights.

We appreciate the High Commissioner’s work to organize a collaborative process to engage stakeholders to discuss the Special Representative’s “Protect, Respect, Remedy” framework.

The United States further notes the High Commissioner’s report on the realization in all countries of economic, social and cultural rights. We thank her office and the Committees highlighted in the Report for their extensive efforts on this wide range of important issues. We are committed to seeking ways to improve the mechanisms that meaningfully and practically contribute to the economic, social and cultural circumstances of people around the world and to combat discriminatory practices that limit access to opportunity. We applaud High Commissioner Pillay’s stand against harsh sentences and the criminalization and stigmatization of people on the basis of their sexual identity. We welcome the OHCHR’s work in protecting all vulnerable populations.

We would also like to thank the Office of the High Commissioner for convening an expert workshop on the rights of peoples to peace, and appreciate the valuable input contributed to the workshop by the invited experts and NGOs. The United States is firmly committed to creating a more peaceful and democratic world, and we strongly feel that the one of the necessary guarantees of preserving peace worldwide is the full enjoyment of human rights by all the peoples. We encourage the Council and the OHCHR to work toward prevention of mass atrocities and encourage the development of an early warning system to alert member states to impending mass atrocities or situations which could lead to mass atrocities. While the United States notes that the “right to peace” is not recognized as a human right as such in any human rights instrument, we are dedicated to working with the members of the Council and with the OHCHR to promote the realization of and respect for the full range of human rights and to promote peaceful co-existence.

We welcome the report on preventable maternal mortality and morbidity and the efforts it makes to highlight activities within the UN system to address this important issue. Fifteen years after States in Beijing declared a goal of reducing maternal mortality 75% by 2015, and ten years after the States at the Millennium Summit committed again to such a reduction, this goal nonetheless remains far from realized. The U.S. is committed to addressing the grave problem of maternal mortality through its Global Health Initiative, which includes a significant focus on maternal and child health. We also look forward to continuing to elevate this issue in the UN system, including through the Global Effort on Women and Children’s Health launched by the UN Secretary General, and to working together to save the lives of women the world over.

Finally, we welcome the focus this session on gender issues and look forward to participating fully in the panel discussion on the human rights of women. We greatly appreciate the work of the current mandate holders to highlight situations and promote women’s issues. There is, however, still much to be done in terms of addressing discrimination against women that the HRC can do and we look forward to working with other member states on strengthening the ability of the Council to help promote and protect women’s rights.