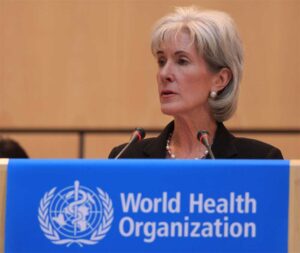 Department of Health and Human Services

Remarks as prepared for delivery

It is my honor and privilege to represent the United States again at the World Health Assembly. Today, on behalf of the entire U.S. Government, I can tell you that we are committed to working with everyone in this room to expand access to health care, reduce health disparities, advance social justice, and improve the health of all nations.

Last year at this time, many of us were focused on a dangerous pandemic that threatened communities around the world, especially children. The H1N1 flu challenged our global health response, and we met that challenge. Thanks to the efforts of people in this room, we avoided the worst predictions. While some have questioned some of the actions taken by the international community, the outcomes speak for themselves. I believe we made the right decisions at the right times.

Our H1N1 response reflected a growing understanding around the world that global health is a shared responsibility – that we all have an obligation and an interest in promoting the health of all people. The highest expressions of that commitment are the Millennium Development Goals.

This year, two thirds of the way to 2015, is an important milestone for those goals

In the last ten years, we have had some notable successes. For the United States, they have included programs like the President’s Emergency Plan for AIDS Relief and the President’s Malaria Initiative. We feel privileged to have contributed through these programs toward the world’s great progress on Millennium Development Goal Six. While much remains to be done in the fight against killer infections like HIV/AIDS, TB, and malaria, we can all be encouraged by the gains we have made.

But we cannot be complacent. That’s why President Obama has launched a historic six-year Global Health Initiative that meets and expands our existing commitments to programs that promote health in some of the poorest countries around the world. This Initiative builds on our successes while also accelerating progress towards the health Millennium Development Goals where we are lagging behind. I’m speaking specifically about the goals on reducing child mortality and improving maternal health.

While some gains have been made in these areas, mothers and children continue to die at disturbingly high rates. It’s not that we don’t know how to save these lives. We have proven, evidence-based interventions that we know can improve maternal and child health.

That’s why our Global Health Initiative will expand our efforts to make pregnancy and childbirth safer, increase the availability of family planning and other reproductive health services, and strengthen health systems to better respond to the needs of women and girls.

Earlier this year we marked the 15th anniversary of the United Nation’s Fourth World Conference on Women and together we drew the important connection between the Beijing Platform for Action and the achievement of the Millennium Development Goals. We understand today that these goals are all tied together and that the empowerment of women and girls is important for meeting any of them, particularly when it comes to health.

Because of women’s roles in childrearing, providing and seeking care, and managing household resources, the ability of women to access health-related knowledge and services also affects the health and stability of their communities. By taking a women- and girl-centered approach in our Global Health Initiative, we expect the benefits to ripple through societies.

Over the last year, we have also learned that progress can bring new challenges. We have made great strides, for example, in reducing under-nutrition around the world. But in some of the same countries where we worry about hunger, obesity and chronic disease such as diabetes and heart disease are now a growing concern. I applaud the World Health Assembly for taking up issues of noncommunicable diseases during this meeting and look forward to working with you to promote better health in these areas.

As our busy agendas this week demonstrate, there is much work left to be done. But today at my second World Health Assembly, I can tell you that the United States is more committed than ever to following through on our shared commitments in global health and building a healthier world for all people.