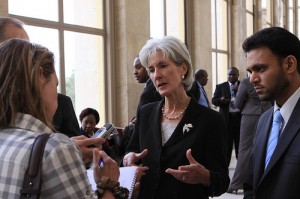 Press Stakeout at the World Health Assembly in Geneva

Special Envoy Hussain: We just finished a productive dialogue with the Health Ministers from the OIC country meeting led by Secretary Sebelius. This is a part of the President’s framework which he set forth last year in Cairo for a new beginning between the United States and Muslim communities around the world. This is a demonstration, of course, of the comprehensive nature of that framework in that this we believe is the first time that the Secretary of Health and Human Services has been engaged at the World Health Assembly with all of the Health Ministers from Islamic nations.

We discussed our ongoing efforts to eradicate polio. We have been encouraged to see that the numbers have declined significantly over the last year.

We also discussed cooperation on H1N1, particularly last year before the [HAJJ] and the success we had in preventing that from becoming a global epidemic.

Finally, we discussed maternal and child health and the programs that we’re developing that we hope to pilot soon, and to increase our cooperation in that area.

We hope these will serve as a basis for even more comprehensive cooperation in the area of health going forward, and all of the countries that were represented reaffirm their commitment to cooperation with the United States and with others on these issues. We hope to continue that going forward.

Question: Just to follow up on something the Secretary said as well on the maternal and child health care, was there a case made about women’s rights to, women’s sexual and reproductive rights? Is that something you pressed in the meeting?

Special Envoy Hussain: Absolutely, we feel that women’s empowerment is a key element in these efforts and it’s very much consistent with the Global Health Initiative the focus on women and girls as part of that initiative. There’s a significant amount of overlap between the cooperation that we see with OIC countries and the Global Health Initiative.

Secretary Sebelius: And although the OIC nations are about a fifth of the world’s population, half the maternal deaths are in OIC countries, so that kind of focused commitment on working together on maternal and child deaths which are part of the Millennium Goals 4 and 5, part of them that are lagging way behind. This is a great forum to refocus and kind of recommit to those goals. There was a lot of interest of ministers in working on those initiatives.

Question: They were receptive?

Secretary Sebelius: Absolutely. Very receptive. And very eager to work on, as Envoy Hussain has said, on not only polio eradication and building health systems, but on maternal and child health issues. So it was a great dialogue. Great attendance, and lots of eagerness and lots of talk about what we do next. When we’re going to get together next and how we can work together. So I thought it was an enormously productive follow-up to the President’s speech almost a year ago.

Question: On polio, obviously there are outbreaks in other parts of the world too, as we’ve seen in Tajikistan and an imported case in Russia. That’s quite a setback for the program that was looking quite good earlier this year, particularly in Africa.

Secretary Sebelius: The numbers are still pretty impressive — 350,000 cases a decade ago, down to about 1600. But as everyone here said, this is a disease where no country is safe. Even though people can say we haven’t had a polio case in so long, as long as we are in this mobile society, until we really eradicate it we haven’t solved the problem.

So I think there are some issues that the OIC countries are willing to again work with us on. The Special Envoy might talk about, there were actually some mixed messages, some confused messages about religious barriers, which are not accurate. So the Ministers reaching out to also the religious leaders in their country to reinvolve and reengage in polio eradication I think is going to be a critical piece of this puzzle.

Question: As we saw in northern Nigeria.

Special Envoy Hussain: Northern Nigeria, I was just there last week in Abuja and we had leaders from the Christian community and Muslim community and other communities in that country that have really worked together on this. As you know, there is significant religious tension in that country, at least religion is a part of the conflict that’s going on there, and they’ve been able to put that aside and really cooperate on having a successful partnership on polio.

One other note. I was happy that the Health Minister from Pakistan offered to host a meeting in Islamabad of the four endemic countries which includes India. So India, Pakistan, Afghanistan and Nigeria. So we look forward to that as well.

Question: Did he give a timeframe for that? This year, presumably?