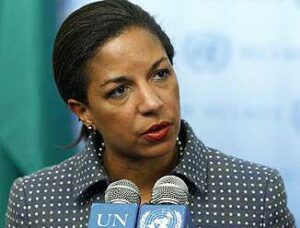 U.S. Mission to the United Nations

Ambassador Rice: The United States joined the Human Rights Council a year ago because we feel very firmly that the promotion and protection of human rights internationally is a core value of the United States, and a fundamental cornerstone of U.S. foreign policy. We did so understanding full well that this is a Council that has not lived up to its potential, and remains flawed, but we have taken the view in this and other circumstances that it is preferable to work from within to shape and reform a body with the importance and potential of the Human Rights Council, rather than to stay on the sidelines and reject it. It will take time, no doubt, for our efforts and those of others to bear fruit and it’s not a task that the United States can accomplish on its own. But we remain committed to strengthening and reforming this Council.

And indeed, we think in the short time that the United States has been on the Council, there has indeed been some progress. In the first instance it’s notable who was not on the ballot today, and that Iran’s bid fell short and was withdrawn in April. Secondly, the United States passed—led an effort last September to pass unanimously an important resolution in the Council on freedom of expression, and brought together countries from all corners to accomplish what was a milestone achievement. The United States also played a leading role in getting the Council to focus constructively on the challenge in Guinea last year and to contribute to a full investigation of the massacres and rapes in Guinea. We were successful in renewing and strengthening country-specific mandates for critical countries like the DRC, Burma, Somalia and Sudan. We have also brought a larger number of countries to join the United States perspective on the problematic concept of defamation of religion. We have work going forward. I am particularly interested in actively shaping the Council in the context of the review that will be coming up in a few months time and we continue to be committed to strengthening and making meaningful the UPR process. But I think we’ll see the results today. I don’t think there’s a great deal of suspense, and we hope that the new Council’s composition for the most part will provide us with partners—not all, but most, with whom we can work constructively to achieve these goals.

Reporter: Some human rights groups have complained about Libya joining the Council, do you share those concerns?

Ambassador Rice: Well I think as you know having covered this institution for a while, the United States doesn’t reveal for whom we vote. But I think it’s fair to say that this year, there is a small number of countries whose human rights records is problematic that are likely to be elected and we regret that. I’m not going to sit here and name names. I don’t think it’s particularly constructive at this point. But it’s obvious which countries that are on the ballot have more problematic human rights records than others. We don’t measure the success of the Council solely in terms of who is on the body. The most important metric is what the Council does, and what actions it takes or doesn’t take. And yet it is the U.S. view that countries that run for and are elected to the Human Rights Council ought to be those whose records on human rights are strong and cannot be impugned. And those that don’t meet that standard really don’t merit membership on the Human Rights Council. But in this body, as in other UN bodies, there will always be countries whose orientations and perspectives we don’t agree with, and yet we have to work with them. And that’s what we will do in this context as well.

Reporter: President Lula is going to Iran on Sunday, as you know he’s been holding out the prospect of bringing Iranians back to negotiating table. I’m wondering to what extent Brazil holding up this prospect on this trip is impeding progress on getting agreement among the P5 on sanctions?

Ambassador Rice: It is not impeding progress in the P5 on reaching agreement, at all. In fact, the P5 +1 have been working intensively, regularly both here and in capitals, and I think we are making good progress. We have always maintained that this is a dual track policy with both pressure and opportunity for diplomatic engagement. And I think the progress the P5 is making perhaps strengthens President Lula’s hand as he delivers a message in Tehran that we hope will be one that pressure is mounting. Iran continues to have a choice. Assuming it continues to make the wrong choices, that pressure will intensify.

Reporter: About the same question. With these overtures to the Iranians (inaudible) sort of a deadline that if these efforts do not produce, you will accelerate your work here towards text. I know that you met yesterday. What is the sort of message is behind the timing, having not met for quite a long time as 5+1 to discuss the text or the potential text of a resolution on sanctions.

Ambassador Rice: It’s not a deadline. We’re working intensively and the pace of our efforts are driven by the urgency we attach to an early and meaningful Security Council Resolution. It is not dictated by any Heads of State travel or Foreign Minister travel or anything of that sort. I think the fact that we met yesterday and the fact that we have been meeting all along, I think, is indicative of the reality that this is an urgent process to which we all attach importance. The meetings occur not only in a 5+1 context but often bilaterally and in subgroups, so this has been an intensive process.

Reporter: As a follow up, Foreign Minister of Russia Lavrov had indicated that it is incorrect of the United States or other western countries to go on considering the potential of bilateral sanctions or regional sanctions outside of the Security Council Resolution or movement here. Is there any such pact? Did you make such a pact that should the Russians and the Chinese come on board, you would not accelerate any ideas of bilateral or regional sanctions on Iran?

Ambassador Rice: The United States and every other member state has a sovereign right to pass laws that they deem necessary to implement their foreign policy. Our Congress is working on that as we speak. So we’re not in a position, nor would we make such a promise or commitment. That said, we obviously believe that there’s critical value in multilateral sanctions, that’s why we’re here at the United Nations. We understand some countries view unilateral sanctions with frustration and dismay. Our priority is to have a strong UN Security Council Resolution and we can’t preclude what might follow, nor can we guarantee what might follow. But I will say that thus far we have had very constructive and cooperative working relationships with China and Russia in the context of the P5+1 and I think we’re making progress.

Reporter: On the Human Rights Council, you said that it was a good move, you know, that Iran would pull back in April. Some have asked, they got a seat on the Commission on the Status of Woman, sort of in exchange for that. What, does the US oppose that? What do you think of that? And can you clarify your statement Monday on Sri Lanka. I just wanted to know, were you saying in that, does the U.S. support the Secretary General’s call to, without delay, appoint a panel to advise him on war crimes in Sri Lanka or was this saying that the Sri Lankan somehow replaces that?

Ambassador Rice: As I think you know, Matt, my statement didn’t address that one way or the other. It was a statement about the Commission that had been established within Sri Lanka, and I didn’t comment on the Secretary General.

Reporter: Do you support the Secretary General’s position?

Ambassador Rice: I think the Secretary General has a very constructive and worthy interest in accountability inside of Sri Lanka, and we support his leadership in that regard. Going back to your original question about Iran, obviously our strong view is that when there are competitive slates for elections to bodies from various regional groupings, that increases the potential for a strong slate to emerge as the ultimate elected slate. And we have encouraged competition. The fact of competition in the context of the Human Rights Council yielded an outcome that we think is a good reflection on the potential of the Human Rights Council. In the context of the CSW, there wasn’t a competitive slate. Iran has served for the most part on that body for over 20 years, for the better part of 20 years. This was not something new, that they were elected unopposed. And we think, in light of Iran’s record on human rights and women’s rights in particular, that’s an unfortunate outcome.