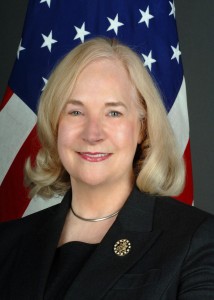 U.S. Representative to the Conference on Disarmament

Thank you, Madame Chairwoman. I would like to congratulate Ambassadors Chidyausiku and Marschik on their election as Chairmen and pledge our support as they undertake these important duties.

This Review Conference provides an opportunity for all of us to rededicate ourselves to the central purpose of this treaty: to prevent the devastating effects of nuclear war. This is the underlying purpose of our efforts here, and of all of our collective efforts to prevent the spread of nuclear weapons and ultimately to eliminate them. It is also is why the U.S. Nuclear Posture Review stressed the importance – not just for the United States but for all nations – of extending forever the 65-year record of non-use of nuclear weapons.

But preventing nuclear war is not something that we or any other nation can accomplish alone. Every nation – indeed every person on this planet – benefits from our efforts to confront global nuclear dangers, and every nation can contribute to their success. Indeed, we all have a responsibility to act with unified purpose to ensure that these efforts succeed. As a part of that collective effort, my government and those of the other nuclear weapon states collaborated on a wide-ranging and balanced statement designed to identify areas of common concern and to identify ways in which we can make progress together. We have read with great interest the many papers and proposals that have been put forward. The Australia-Japan paper just presented by our Australian and Japanese colleagues provides one example of a balanced and realistic starting point.

In his April 2009 speech in Prague, President Obama made clear the U.S. commitment to his intent to reduce the role of nuclear weapons in U.S. national security strategy and to take concrete steps toward a world without nuclear weapons. He identified three areas where the international community needs to work together to reduce nuclear dangers: disarmament, nonproliferation, and nuclear security.

On disarmament, he reaffirmed the U.S. commitment to seek the peace and security of a world without nuclear weapons. He acknowledged that achieving this goal would not be easy and might not take place in his lifetime. It will require patience and persistence to overcome the obstacles to this vision.

President Obama identified specific steps the United States will pursue to achieve this goal. These include the New START Treaty he and Russian President Medvedev signed in Prague last month. My distinguished colleague, Ambassador Antonov, presented on behalf of our two delegations a statement on New START. This treaty demonstrates the continuing commitment of the world’s two largest nuclear powers to reduce their nuclear arsenals and advance the objectives of Article VI. I am delighted that the two lead negotiators, Assistant Secretary Gottemoeller and Ambassador Antonov, will offer a briefing to the Conference on May 11.

We will also seek to ratify the Comprehensive Nuclear Test Ban Treaty and to encourage others to do the same, in order to bring that treaty into force. My President just welcomed Indonesia’s decision to move forward on ratification of the CTBT to whom we all say “terima kasih” – thank you.

We have redoubled our efforts to negotiate a Fissile Material Cutoff Treaty, which would put an end to the production of the essential ingredients in nuclear weapons. I will have more to say on these disarmament efforts in my statement to the Subsidiary Body of this Committee.

On nonproliferation, President Obama committed the United States to strengthen the NPT as the basis for international cooperation to prevent the further spread of nuclear weapons. “The basic bargain is sound,” he said. I would like to examine that bargain more closely and examine what makes it so important to all of us.

That is why we need to work together to halt nuclear proliferation and to strengthen international safeguards in order to provide stronger assurances that states are meeting their non-proliferation obligations and stronger tools to respond if they do not. Our efforts cannot succeed if violators are allowed to act with impunity. Therefore, we will need to establish effective, internationally supported mechanisms for discouraging and reversing noncompliance.

To put it simply, nonproliferation is one of the essential conditions for the achievement of nuclear disarmament. This is one reason why the disarmament undertakings in Article VI apply to all Parties to the Treaty.

Another important part of the NPT bargain, just as important and much more immediate, is the bargain among the non-nuclear-weapon states, who commit to one another not to acquire nuclear weapons. This is arguably the greatest and most immediate benefit to the security of most of the states party to the NPT.

To extend these security benefits as broadly as possible, we remain committed to the goal of universal adherence to the Treaty. While we pursue that goal, we call on those states that have yet to sign the NPT to adopt the standards and practices embodied in the NPT and the broader nuclear non-proliferation regime.

We also call on North Korea – the one state that has announced its withdrawal from the Treaty – to return to compliance with the NPT and IAEA safeguards, as called for in the September 2005 Joint Statement from the Six-Party Talks and in successive resolutions of the UN Security Council.

There are other connections between the non-proliferation and disarmament goals of the Treaty, particularly in the area of verification. The International Atomic Energy Agency has decades of experience in applying safeguards to verify that peaceful nuclear activities are not diverted to weapons use. This experience can be brought to bear in the nuclear disarmament process in two critical ways.

First, nuclear-weapon states may choose to place under IAEA verification material they identify as no longer needed for weapons purposes, and can invite the IAEA to verify that it is converted into forms no longer suitable for nuclear weapons use, as the United States has done. Since the end of the Cold War, the United States has down-blended nearly 118 tons of highly enriched uranium removed from defense programs – enough for roughly 3,000 weapons – to produce low-enriched uranium reactor fuel. Much of that down-blending took place under IAEA safeguards or in facilities available for IAEA inspection. Together with Russia, we are working to dispose of at least 68 tons of plutonium from weapons programs – enough for over 17,000 weapons – and we foresee a critical verification role for the IAEA in that disposition.

Second, the IAEA could – and in our view should – be given the responsibility to verify that states are not producing new fissile material for use in nuclear weapons. A verifiable Fissile Material Cutoff Treaty could place under IAEA monitoring all of the most sensitive fuel cycle facilities – enrichment and reprocessing facilities – that are capable of producing fissile material.

These important steps by the IAEA could make an important contribution in promoting international confidence that nuclear material and facilities formerly dedicated to nuclear weapons programs are now devoted entirely to peaceful purposes.

Alongside nuclear disarmament and nonproliferation, the third element of President Obama’s Prague agenda is nuclear security. To address the nuclear dangers that we face, we need to prevent the use of nuclear weapons, not just by states but by violent non-state actors. The potential availability of weapons-usable materials, and the widespread knowledge of how to manufacture a simple nuclear explosive make this a real and pressing threat.

This is why President Obama established the goal of securing the most sensitive nuclear materials in the world within four years. The Nuclear Security Summit last month brought together leaders from forty-seven countries and three international organizations to make concrete commitments to advance this goal.

Alongside nuclear disarmament and non-proliferation, nuclear security is an essential part of our efforts to create the conditions for a world without nuclear weapons, a goal to which we must all rededicate ourselves here. This must be our common vision, and achieving it will require concerted efforts by all countries, nuclear-weapon states and non-nuclear-weapon states alike.

The three pillars of the NPT provide a solid architecture for our broader efforts to confront nuclear dangers worldwide. But this structure cannot endure if we pick and choose which parts of it we want to support, and withhold support from others. Our choice is clear: we must work together to reinforce all three pillars of the Treaty to ensure that its benefits endure for future generations.