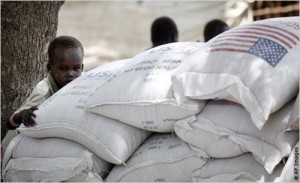 Washington — Hunger numbers are rising as the developing world continues to deal with the compounding effects of a global financial crisis and a global food crisis, warns the executive director of the United Nations World Food Programme (WFP), Josette Sheeran.

Sheeran discussed global hunger recently at a briefing in Washington.

One of the effects of the global financial crisis, she said, is that in the near future, world policymakers will have to make very tough choices between spending priorities. “We are really feeling the need to make the case very strongly about preventing starvation, preventing famine, about global action,” she said.

“The difficult message for this year is that the pressure is not off. We have to sustain the same level of involvement in some of the most difficult places in the world and make the case that the food and financial crisis is still there and that we are seeing places that, frankly, we expect to get more difficult in the coming months.”

One of those places, she said, is southern Sudan, where the WFP is feeding 4 million people. Add the combined effects of drought, conflict and a reduction in incomes due to the financial situation and even larger interventions will be needed to keep people from suffering, she predicted.

Somalia is another case in point, along with Pakistan, Afghanistan and Yemen, she added.

“I would like nothing more than a message that we are out of the woods [free from serious hunger problems], we have turned the tide [achieved our goals] and that the hunger numbers are going in the right direction, but that is not the situation right now. So, certainly for the World Food Programme, we find ourselves really pressed in an even more challenging situation, and that is saying a lot.”

The WFP’s logistics and operations experts classified earthquake-ravaged Haiti as the most difficult situation the organization has ever faced, Sheeran said

Despite this, however, she called the WFP’s post-earthquake services there a success story. “We did not see people starve there. The intervention is massive, and we were able to get the food distribution to 2.5 million people and stabilize the situation. Now, I think the nature of that operation is really switching to one where the food security efforts will help rebuild longer-term food security” through food-for-work and cash-for-work programs. Twenty-six thousand people are already working in these programs, and that, she forecast, will grow to 70,000 by the end of May.

Sheeran said WFP remains on “high alert” for hunger worldwide and the chance that problems could adversely impact the stability of nations.

She cited the April 22 announcement of the Global Agriculture and Food Security Program as a helpful initiative.

In this initiative, a core group of finance ministers from the United States, Canada, Spain and South Korea, as well as the leadership of the Bill & Melinda Gates Foundation, met April 22 at the U.S. Department of the Treasury to announce an initial contribution of $880 million for a new fund to tackle global hunger and poverty and to discuss ways to foster additional contributions from the public and private sectors around the world.

The new fund will include a U.S. commitment of $475 million, a key element of the Obama administration’s initiative to enhance food security in poor countries.

The Global Agriculture and Food Security Program, Sheeran said, will look at longer-term investment in agricultural production, but also at connecting food to people. “The access to affordable nutrition in countries which also looks at value-added production and supply chain of food, this is very important,” she said.

Now is the time, Sheeran said, for the WFP to focus on two key things: emergency hunger needs worldwide, which are not diminishing, and the need to work with countries “that will be the next to break the hunger curve” by defying the upward global trend of increased hunger.

“There is a new generation of countries such as the Rwandas and the Malawis that will follow what Brazil, China and Chile have achieved just in the past decade or so” in making substantive progress in fighting chronic hunger, she said.

In sum, Sheeran said: “We need to keep food security front and center on the world agenda. … Hunger remains one of the great challenges of humanity. I think it is a winnable battle, and I think it can be solved within a generation, but it will require really looking at insuring that the kind of innovative solutions are in place along with emergency actions.”

As the front-line United Nations agency in the fight against hunger, WFP is continually responding to hunger emergencies worldwide. In 2010, WFP expects to bring food assistance to more than 90 million people in 73 countries.