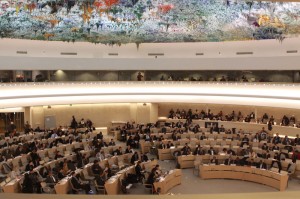 The United States welcomes Mr.Bakary Fofana, State Minister, Acting Foreign Minister and the Guinean delegation to the Working Group of the UPR. We have carefully considered the information the delegation has provided in its national report and in its presentation this morning. We offer the following comments and recommendations.

The United States supports the January signing of the Ouagadougou Agreement and the February establishment of a Transitional Government as positive steps toward the country’s return to constitutional order and rule of law.

We remain deeply concerned about human rights violations that have ensued from the country’s political and social crises, such as killings, sexual assaults, arbitrary detention, and torture, by security forces.

The United States recognizes that the end of the recent military regime presents an opportunity for democratic progress in the country and to demonstrate its commitment to safeguarding the civil liberties of its citizens. However, undisciplined security forces not subject to civilian control could derail this transition.

In light of these concerns, the United States makes the following recommendations: