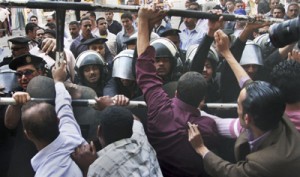 The United States joins the international community in celebrating World Press Freedom Day. A free press is essential to an empowered citizenry, government accountability and responsible economic development. Wherever independent media are under threat, accountable governance and human freedom are undermined.

Courageous journalists across the globe risk their freedom and their lives to provide independent information on government actions and their consequences; report the news from conflict zones; expose crime, corruption and wrongdoing; and reveal human rights violations – all despite efforts, in some cases, by governments and others, to control what people read, hear and think.

For exercising the right to free expression, journalists and bloggers are too often targeted for harassment, intimidation, arrest, physical attack and even murder, often at the hands of unknown assailants who act with impunity. In November 2009, President Obama applauded the efforts of Cuban blogger Yoani Sanchez to “empower fellow Cubans to express themselves through the use of technology” and said that her blog “provides the world a unique window into the realities of daily life in Cuba.” That same month she and two fellow bloggers were forcibly detained by plain clothes security personnel while en route to a peaceful demonstration, and she and one of her companions were beaten. Also in 2009, Burmese freelance journalist Hla Hla Win was sentenced to 27 years in prison on trumped-up charges based on nothing more than interviewing monks in commemoration of the Saffron Revolution. And Natalya Estemirova, an independent journalist from Russia who was known for her fearless reporting on human rights violations in Chechnya was kidnapped and murdered. In total, 71 journalists were killed last year, many murdered with impunity.

Governments in every region of the world apply restrictive laws and regulations and other controls on media freedom. These restrictions often extend beyond traditional print and broadcast media to new forms of electronic communications through the Internet and other new technologies. The State Department’s human rights report detailed our concerns about these practices.

Article 19 of the United Nations Universal Declaration of Human Rights is as relevant in our globalized Information Age as it was when it was adopted over six decades ago: “Everyone has the right to freedom of opinion and expression; this right includes freedom to hold opinions without interference and to seek, receive and impart information and ideas through any media and regardless of frontiers.” The United States is committed to working in partnership with members of the media, the private sector, non-governmental organizations and other concerned governments to defend freedom of expression and the brave journalists who are persecuted for exercising it on the challenging new terrain of the 21st century.