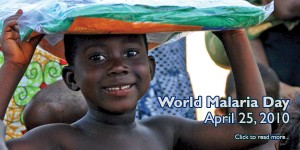 WASHINGTON, D.C. – April 22, 2010 – In conjunction with World Malaria Day, and in accordance with the requirements of the Tom Lantos and Henry J. Hyde United States Global Leadership Against HIV/AIDS, Tuberculosis and Malaria Reauthorization Act of 2008 (Lantos-Hyde), the U.S. Government (USG), through the President’s Malaria Initiative (PMI), today released a comprehensive strategy to combat malaria globally.

For about half the world’s population, malaria remains one of the greatest threats to public health. Sub-Saharan Africa is the epicenter of the world’s malaria control activities where the ancient disease casts a shadow not only over health, but also on educational achievement, worker productivity, and economic development. About 85 percent of malaria cases around the world and 90 percent of deaths are estimated to be in Africa.

Malaria control is a core component of President Obama’s Global Health Initiative and is critical to USG efforts to help countries meet the Millennium Development Goal target to reduce the mortality in children under age five by two-thirds.

PMI, led by the U.S. Agency for International Development (USAID) and implemented with the Centers for Disease Control and Prevention, addresses poverty on the African continent through its efforts to reduce the burden of malaria. Since 2006 PMI has helped 15 high-burden countries in Africa rapidly scale up highly-effective malaria prevention and treatment interventions.

Over the initial four years of the initiative, there has been a dramatic scale-up of malaria prevention and treatment measures in 15 PMI-supported countries. Many of these countries have reported significant reductions in under-five mortality, and there is strong and growing evidence that malaria prevention and control are a major factor in these reductions. The USG has played a key role in the scale-up of malaria interventions by supporting training of health workers, improving services, procuring commodities, strengthening health systems. Progress in malaria control is a result of the collective actions of African governments; international donors, including the USG, The Global Fund to Fight AIDS, Tuberculosis, the World Bank; and nongovernmental organizations.

The new USG strategy works toward the goal of halving malaria illnesses and deaths in 70 percent of at-risk populations in sub-Saharan Africa, by accelerating malaria prevention and treatment efforts, building national capacities, and strengthening key health systems. The strategy also outlines contributions to curtail the spread of antimalarial multi-drug resistance in Southeast Asia and South America and to increase emphasis on strategic integration of malaria prevention and treatment activities with programs for maternal and child health, HIV/AIDS, neglected tropical diseases, and tuberculosis.

“Sustainability of malaria control programs is a critical goal of U.S. efforts,” said Rear Adm. Tim Ziemer, U.S. Global Malaria Coordinator. “The United States is focusing on building capacity within host countries by training people to manage, deliver, and support the delivery of health services, which will be critical for sustained successes against infectious diseases.”

The USG vision for long-term malaria control is consistent with that of the Roll Back Malaria partnership’s Global Malaria Action Plan’s strategy to achieve and sustain reductions in worldwide malaria deaths and illness over the next 10 to 15 years. The U.S. will continue to work within national control strategies and fund national malaria control plans to ensure country ownership and sustainability.