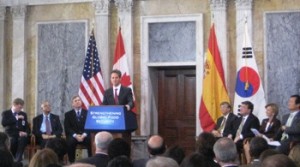 Initial Contributions to Leverage Additional Donor Support from Around the World, Public and Private Sectors

WASHINGTON – Today, a core group of finance ministers from the United States, Canada, Spain and South Korea, as well as the leadership of the Bill & Melinda Gates Foundation, met at the U.S. Department of the Treasury to announce an initial contribution of $880 million for a new fund to tackle global hunger and poverty and to discuss ways to foster additional contributions from the public and private sectors around the world.

“As we work to build a stronger, more stable and balanced global economy, we must renew our commitment to tackle global hunger and poverty,” said Treasury Secretary Tim Geithner. “A global economy where more than one billion people suffer from hunger is not a sustainable one. At a time of limited resources and large global challenges, this fund will leverage support from around the world to achieve lasting progress against hunger and bolster agricultural productivity and growth.”

The fund was created in response to a call by G-20 leaders in Pittsburgh last year for the World Bank Group to work with interested donors to set up a multi-donor trust fund to help implement some of the $22 billion in pledges made by G-8 leaders at their meeting in L’Aquila.

The United States has already contributed $67 million to the fund and has requested $408 million in President Obama’s FY 2011 budget, which is subject to Congressional appropriation. This investment is a key element of the Administration’s initiative to enhance food security, raise rural incomes and promote stability in poor countries and will complement the bilateral food security activities of U.S. Agency for International Development (USAID) and the U.S. Department of Agriculture.

“With the global number of chronically hungry reaching 1 billion, working together to put an end to the status quo and improve on past efforts is both a moral and economic imperative,” said Agriculture Secretary Tom Vilsack. “The financial commitments to the Global Agriculture and Food Security Program announced today will help address this critical issue in a meaningful and comprehensive way.”

With the aim of boosting agricultural assistance to poor countries, the fund will have both public and private sector accounts to provide financing to countries that have robust agriculture strategies. The public sector account will provide aid for better irrigation systems, linking farmers to markets and building post-harvest storage infrastructure. The private sector account will provide innovative financing to increase the commercial value of small and medium-sized agri-businesses and farmers.

“Investing in small farmers is an incredibly effective way to combat hunger and extreme poverty – history has proved it many times,” said Bill Gates, co-chair of the Gates Foundation, which has committed $1.5 billion to date to agricultural development. “The launch of this fund is an important step forward, but only a first step. Other countries meeting at the European, G-8 and G-20 summits in June and at the U.N. Summit in September should join the four founding partners and make good on their pledges. If we all sustain focus until the job is done, hundreds of millions of people will lead better lives.”

The fund aims to improve the income and food security of poor people in developing countries. It is estimated that the sudden increase in food prices in 2008 drove 100 million people into poverty. Even before the food price spikes, 850 million people in poor countries were chronically malnourished. Agriculture, seen as vital for development, has also been affected by low levels of investment over the past few decades and issues like climate change.

“At a time when practical and effective solutions are required, Canada is pleased to be among the first to help fund such a valuable program,” said Jim Flaherty, Canada’s Minister of Finance. “Our $230 million contribution builds on Canada’s ongoing efforts to improve sustainable agriculture for the world’s poorest. It also ensures international institutions have the resources they need to help countries tackle increasingly difficult challenges. None are as basic, as urgent or as unacceptable as global hunger.”

“We have to maintain our degree of commitment with the poor,” said Elena Salgado, Second Vice-President and Minister of Economy and Finance of Spain. “We cannot forget the 75 percent of the world’s poor that live in rural areas. Sustaining food security requires a comprehensive approach that encompasses increasing agriculture productivity, fostering rural development and guaranteeing access to markets, especially for small farmers. Vulnerable populations would benefit from surpluses thus generated, through food safety nets.”

“Korea experienced a severe food shortage and poverty at the initial stages of its economic development in the 1960s,” said Korean Finance Minister Yoon Jeung-Hyun. “The experiences made Korea recognize the importance of food security. In this regard, we will spare no effort in supporting developing countries’ economic development and helping to strengthen their agriculture sector with empathy rather than sympathy, deep down in the heart.”

Hosted by the World Bank Group, a number of agencies, including the African Development Bank, the World Bank and the International Fund for Agricultural Development, will implement the projects financed by the fund. The fund will embrace a transparent governance structure by ensuring that recipient countries and civil society organizations, as well as donors, have a voice in the operation of the fund.

“Malnutrition and hunger afflicts millions of vulnerable people in Africa who cannot afford to grow and buy sufficient food,” said Jean Ping, the Chairman of the African Union Commission. “Last year, the international community pledged resources to help the world’s poorest farmers. The establishment of this fund is an important signal that donors intend to meet their commitments and help African countries implement their comprehensive agriculture strategies. We urge other countries to come forward and make good on their promises.”

“With a sixth of the world’s people going hungry every day, the crisis in food remains very real, posing a severe economic burden on developing countries, especially in Sub-Saharan Africa,” said World Bank Group President, Robert B. Zoellick. “Co-operation and coordination are vital to boost agricultural productivity and connect farmers to markets, as agriculture is the main lifeline today for about 75 percent of the world’s poor.”