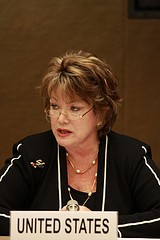 General Scowcroft, thanks so much for your kind introduction and for your patriotism, as well as your knowledge and experience that you bring to these issues. It’s an honor for me to be with you.

I am thrilled to be with so many friends, including Chuck Hagel and Fred Kempe. Thanks so much for inviting me and bringing together such an esteemed group, from both sides of the aisle. And I want to welcome our Russian friends.

Some of you know that I spent the much of March at the negotiating table in Geneva. Having dedicated much time and effort to working through the tough issues with our Russian counterparts; and having served in the Congress and worked on a few deals there; I know what a good bipartisan agreement looks like.

In my experience, such agreements enhance our national security and that is what the New START Treaty will do. It will ensure and maintain the strategic balance between the United States and Russia at lower weapons levels. And it will promote strategic stability by ensuring transparency and predictability over the life of the Treaty. Meanwhile, the United States will sustain a safe, secure, and effective nuclear force to protect ourselves and our allies.

So let me take a few minutes today to explain why a New START Treaty would enhance our national security. I want to make the case that it deserves bipartisan support.

Much has changed since the first START Treaty was signed by Presidents Bush and Gorbachev in 1991. Today’s leading threats – nuclear proliferation and terrorism – do not require the United States and Russia to deploy large nuclear arsenals.

Let me start with the basics. The New START Treaty includes a 30 percent reduction from the maximum limit on deployed strategic warheads from the Moscow Treaty down to 1,550. There is also an aggregate limit of 700 for deployed strategic delivery vehicles and a separate ceiling of 800 for non-deployed and deployed launchers.

The verification regime builds on the knowledge of each other’s nuclear forces and practices gained from 15 years of implementing START and it reflects the improved U.S.-Russian relations since the end of the Cold War. It was designed to be effective while at the same time reducing the implementation costs and mitigating the operational disruptions that each side had experienced under START.

It includes on-site inspections of both deployed and non-deployed systems at the same facilities that were subject to inspection under START, six-month data exchanges, exhibitions, and extensive notifications.

This verification regime will help build trust and prevent misunderstandings and miscalculations. It will provide both sides the confidence that the other is upholding its obligations.

And the new Treaty allows both sides to determine their own force structures, giving us the flexibility to deploy, maintain, and modernize our strategic nuclear forces in a way that best protects our national security interests.

Beyond what’s in the treaty, getting the United States Senate’s advice and consent would allow us to build upon a more constructive partnership with Russia. We have already reaped some diplomatic gains, notably improving relations with Russia. Disagreements over issues, like missile defense, remain. But we are now talking with each other as opposed to just talking past one another.

Our cooperation is a prerequisite for moving forward with tough, internationally binding sanctions on Iran. Will this agreement result in Iran and North Korea changing their behavior?

It’s unlikely. But ratification of the New START Treaty could help us persuade other nations to hold those countries accountable.

It would also demonstrate that the United States is living up to our obligations under the Nuclear Nonproliferation Treaty. That’s an important achievement as we head into the NPT Review Conference next month.

I want to say a word about missile defense because that is where the most vocal critics have focused their energy. While the Treaty’s preamble acknowledges the interrelationship between offensive and defensive systems, that is nothing new. The New START Treaty is about strategic offensive arms.

The New START Treaty does not constrain U.S. missile defense programs. The United States will continue to improve our missile defenses, as needed, to defend ourselves, our deployed forces, and our allies and partners.

Our Russian friends needed some assurances as it negotiated deeper reductions in the absence of an ABM Treaty. The United States made a unilateral statement to clarify that our missile defense systems are not intended to affect the strategic balance with Russia, but would instead be employed to defend the United States and to defend our deployed forces, allies, and partners against regional threats.

Let me talk about one more topic for those of you wearing green eye shades.

The New START Treaty counts the actual number of warheads carried on deployed ICBMs and SLBMs. Since the heavy bombers on both sides are no longer on alert, the sides agreed to an attribution rule of one warhead per heavy bomber rather than count heavy bombers at zero warheads. This strikes a balance between the fact that either side has nuclear armaments on its bombers on a day-to-day basis and the fact that these bombers nonetheless have the capability to deliver nuclear weapons.

For many of us in the room, arms control and nonproliferation have been our life’s work. But with the Soviet Union and the United States no longer aiming thousands and thousands of nuclear missiles at each other, the public’s awareness has dissipated. Secretary Clinton even answered a question from a reporter a few weeks ago about whether Americans’ eyes glazed over on the topic of arms control.

I know that won’t happen here, nor should it. President Obama, Secretary Clinton, and Secretary Gates have all painted chilling pictures of what would happen if terrorists acquired nuclear material or a nuclear weapon. Even if the relationship between the United States and Russia does not generate the interest that it once did, a terrorist with a bomb does. Just look at the buzz over two new movies, “Nuclear Tipping Point” and “Countdown to Zero.”

In today’s political climate, that is considered news. But Republican and Democratic administrations traditionally have worked together with Congress to reduce the risk of nuclear war and to maintain a safe, secure, and effective deterrent to protect the United States and our allies in Europe, the Pacific, and elsewhere.

The Senate approved the INF, START, and the Moscow Treaties by healthy margins. The Obama Administration negotiated an agreement that should enable that tradition to continue. We already have started working with Senators to brief them and get them comfortable with what’s in … and what’s not in … the New START Treaty. And on the issue of stockpile management, we have proposed significant spending increases.

As we engage with the Senate, as we let them know what is in and what’s NOT in the Treaty, we can achieve and earn a significant level of bipartisan support. I hope to work with all of you in the coming months to do just that.

Fred, thanks so much and I’m happy to take any questions.