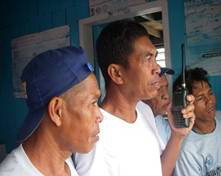 Protected areas lead to increased biodiversity and income for residents

For many years, Nasirin “Kah Nas” Taraji and other fishers in the southern Philippine province of Tawi-Tawi occupied one of the area’s best sites for collecting fish with “fish pens” or “corrals”. They enjoyed relatively good yields, but elsewhere in their town, fish catches were declining at a rate fast enough to alarm local officials and the fishing communities.

Hoping to arrest the decline, USAID offered assistance to the local government, which had plans to set up a marine sanctuary. Sanctuaries can help ensure more productive fisheries by protecting critical fish habitat. The best site for the proposed sanctuary was in the same area where the fish pens were located, so the mayor asked the operators to move to another location. To encourage compliance with the new sanctuary regulations, the mayor offered the affected fish pen operators a monthly stipend of 1,000 pesos (about $20), provided they helped to guard the sanctuary. Kah Nas accepted and became one of the first fishery wardens.

Initially, the fish catch in the new location was disappointing, and even Kah Nas began to doubt his decision to support the sanctuary. “My income dipped to 3,000 pesos ($60). I got nervous. I thought, ‘What if production doesn’t go up? What will happen to my family?’” he asked.

Within a short time, however, the situation did improve. A year after the sanctuary was set up and the fish pens were moved, Kah Nas’ earnings had risen to 12,000 pesos ($250), as had the other operators’ incomes.

Today, “our [fish] corrals are yielding more because there are now so many fishes inside and outside the sanctuary,” Kah Nas proudly said. “There are all kinds of fish here now. We also see dolphins and sea turtles, and we’ve even spotted a crocodile,” he said.

Most of all, Kah Nas said, “now all my relatives support the sanctuary. I think they understand better. They say, ‘Without the sanctuary, we won’t have any fish left to eat.’”