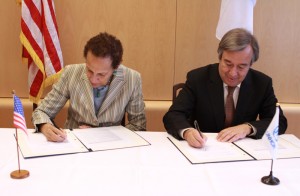 On April 21, 2010, representatives of the United States Government and the Office of the UN High Commissioner for Refugees (UNHCR) signed a bilateral Framework for Cooperation agreement for the years 2010 and 2011, signaling their continued partnership to advance protection, assistance and durable solutions for refugees, stateless persons, and other vulnerable persons of concern.

The U.S. Government, as UNHCR’s largest bilateral donor, has consistently supported the important work of UNHCR.  In Fiscal Year 2009, the U.S. provided over $600 million to the refugee agency.  The bilateral Framework for Cooperation agreement will be updated biannually to reflect current priorities and to ensure accountability and transparency.