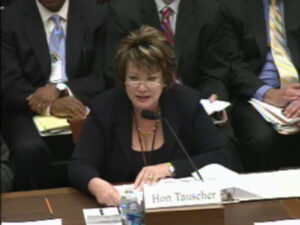 Chairman Skelton, Ranking Member McKeon, distinguished members of the House Armed Services Committee, thank you for the opportunity to discuss our shared role in protecting the United States and our allies from today’s most pressing threats.

Before I begin, I want to thank you for your service and I want you to know that I miss the Committee. It is an honor, however, to be a part of the Obama Administration and to work with President Obama and Secretary Clinton to implement our arms control and nonproliferation agenda.

As you know, we have an ambitious agenda to reduce the role and numbers of nuclear weapons to make the United States more secure and the world more stable.

The President set forth several goals in his speech in Prague last year; three of which have been advanced in the past few days. First, he wanted a new Treaty that would make verifiable and mutual cuts in the United States and Russia’s nuclear arsenals. Second, he vowed to reduce the role of nuclear weapons in our security posture. Third, he set a goal of securing all vulnerable nuclear material within the next four years. At the same time, the President reaffirmed our commitment to maintaining a safe, secure, and effective deterrent to protect the United States and our allies so long as nuclear weapons exist.

Mr. Chairman, as you know, the State Department, working with our friends across the river at the Department of Defense and with the rest of the inter-agency team and the Congress … are fully engaged in implementing the President’s agenda.

At the Nuclear Security Summit, President Obama worked with allies and partners to commit to strengthen nuclear security and reduce the threat of nuclear terrorism. As you know, he gained cooperation from Ukraine, Chile, Canada and others to help lock down this dangerous material.

Last week, the Administration released the Report of its year-long Nuclear Posture Review (NPR). This review constitutes a clear break from past reviews, both in terms of process and scope. The Department of Defense led the review, but for the first time the interagency, including the Department of State, fully participated in discussing the issues and making recommendations to the President. For the first time, the Nuclear Posture Review is an unclassified document. The Obama Administration took a broad, whole of government approach to addressing U.S. nuclear policy and identifying concrete steps to enhance our national security.

Finally, last Thursday, President Obama traveled to Prague to sign the New START Treaty. I spent the last few weeks of March at the negotiations in Geneva and helped to conclude the agreement. The New START Treaty will improve U.S. and international security by reducing and limiting U.S. and Russian strategic nuclear forces; promoting strategic stability by ensuring transparency and predictability regarding U.S. and Russian strategic nuclear forces over the life of the Treaty; and advancing our nuclear nonproliferation efforts.

The Treaty sets meaningful, lower limits on deployed strategic warheads and their delivery vehicles and launchers – limits that the Department of Defense validated through rigorous analysis in the early months of the Nuclear Posture Review. Its verification regime will provide each side confidence that the other is upholding its obligations. The new Treaty gives our military the flexibility to structure, deploy and maintain our forces in ways that best meet U.S. national security interests.

Let me make one final point. Under the new Treaty, the United States will continue to maintain a safe, secure, and effective strategic nuclear force to protect ourselves and our allies and partners.

The United States and Russia can safely reduce our nuclear forces because the threat environment has changed. Today’s most pressing nuclear threats come from terrorists and additional countries seeking nuclear weapons, not the risk of large-scale nuclear attack as during the Cold War. The conclusions of our recent Nuclear Posture Review reflect that reality. The NPR directs us to preserve the effectiveness of our nuclear deterrent for as long as it is required, reduce the potential for conflict, enhance strategic stability worldwide, and strengthen the nonproliferation regime.

The NPR outlines a new approach that will ensure that our defenses and diplomacy are geared toward those objectives.

Nuclear proliferation and terrorism are global challenges and they demand a global response. That is why President Obama invited world leaders to Washington for a nuclear security summit earlier this week to seek commitments from all nations to take steps to secure vulnerable nuclear materials and prevent nuclear smuggling in order to stop terrorists or criminal organizations from acquiring these dangerous materials.

We must deny highly enriched uranium and separated plutonium to terrorists groups because they would surely use the material to develop a weapon and use the weapon itself.

Our updated Negative Security Assurance (NSA) reinforces the President’s objectives of reducing the roles and numbers of nuclear weapons by making it clear that the United States will not use or threaten to use nuclear weapons against non-nuclear-weapons states that are party to the Nuclear Nonproliferation Treaty (NPT) and in compliance with their nuclear non-proliferation obligations.

The purpose of this change is to emphasize to non-nuclear states the security benefits of adhering to and fully complying with the Nuclear Nonproliferation Treaty and their nuclear nonproliferation obligations. Some have suggested this might lead such states to be less fearful of the consequences of using chemical and biological weapons. Nothing could be further from the truth. Let me be clear, no one should doubt the resolve and conventional military capabilities of the United States to respond to such aggression with devastating effect and to hold accountable those responsible.

Along with our international partners, the United States is pursuing diplomatic efforts to convince Iran and North Korea to resolve the world community’s concerns about their nuclear programs and to encourage them to cooperate in addressing all outstanding questions about those programs. We are working to build international consensus for steps that will convince Iran’s leaders to change course, including new UN Security Council sanctions that will further clarify their choice of upholding their NPT and safeguards obligations or facing increasing isolation and painful consequences.

With respect to North Korea, we continue to send the message that simply returning to the negotiating table is not enough. Pyongyang must move toward complete and verifiable denuclearization through irreversible steps, if it wants a normalized, sanctions-free relationship with the United States.

These steps send a clear message about this Administration’s priorities and resolve. Our commitment to defend our national security interests and our allies and partners in Europe, the Pacific and elsewhere has never been stronger.

In this regard, the NPR emphasizes close co-operation with our allies around the world and maintains our firm commitment to mutual security. We will work with our partners to reinforce regional security architectures, such as missile defenses, and other conventional military capabilities. And, I want to repeat what I said earlier, the United States will continue to maintain a safe, secure, and effective nuclear deterrent for ourselves and our allies so long as these weapons exist anywhere in the world.

In order to reduce the risk of proliferation, we will establish effective and internationally supported mechanisms to address noncompliance with nonproliferation obligations. Together with our international partners, we will work to resolve regional disputes that could motivate rival states to acquire and maintain nuclear weapons.

Mr. Chairman and Ranking Member McKeon, I look forward to working with this Committee and the Congress on these important matters.

Thank you for holding this important hearing and I look forward to any questions you might have for me.

Last year, President Obama said he would seek the peace and security of a world without nuclear weapons. He also was very clear that it might not happen in his lifetime. The standards for a world without nuclear weapons are very high. But we are taking concrete steps in that direction, which make us stronger, safer, and more secure. That is why we are working to halt nuclear proliferation, to gain greater transparency into the programs and capabilities of key countries of concern, and to create verification methods and technologies capable of detecting violations.