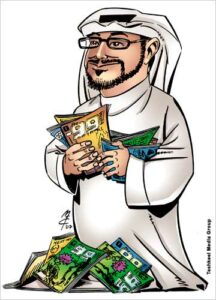 This article is part of a series on delegates to the April 26–27 Presidential Summit on Entrepreneurship.

Washington — Naif Al-Mutawa may not be a superhero, but he is great at creating them.

Al-Mutawa conceived The 99, a comic book series inspired by Islam and the 99 Names of God, in 2003. Seven years later, the comic seems to have taken on superpowers of its own and is morphing into an animated series.

“I just saw the first episode, and it has set the bar on television animation the way Avatar has for cinema, it is that good,” Al-Mutawa said. The series will begin airing this fall. “This is going to be the major form of broadcast and distribution and will be going into homes all over the world.”

The 99 is published by the Teshkeel Media Group, founded by Al-Mutawa in 2006. The global operation has offices in Cairo, New York and Kuwait, Al-Mutawa’s home country. A clinical psychologist by training, Al-Mutawa is an internationally recognized business figure known for creating The 99 and promoting it through Teshkeel.

In 2009, Al-Mutawa received the Davos World Economic Forum’s Middle East Regional Social Entrepreneurs Award. In the same year, he was named to the Royal Islamic Strategic Studies Center’s list of the 500 most influential Muslims in the world.

Colored and written by veteran artists from Marvel and DC Comics, The 99 is one of the few home-grown comics in the Arab world. It tells the story of superheroes searching for 99 gems that contain the light of ancient wisdom. Translated into eight languages, The 99 showcases the diversity of Muslims through its wide range of characters, but does not discuss religion.

“What I do with The 99 is challenging the perception of Islam to both Muslims and non-Muslims alike,” Al-Mutawa said. “I am not allowing people who have self-appointed themselves to speak for God to make those decisions or to say they are the only ones who own the microphone.”

Al-Mutawa’s comic book series wrestles with its share of controversy.

An upcoming documentary called “Wham, Bam, Islam” on the PBS network in the United States follows the development of The 99 from an idea to animation and covers the controversies associated with Al-Mutawa’s idea.

American comic book heroes meet their counterparts from The 99 this year. The meeting between the two comic book worlds will honor President Obama’s speech to the Muslim world last June in Cairo.

“We announced three weeks after his speech that Batman, Superman and Wonder Woman are going to be reaching out to my characters,” Al-Mutawa said. Six 22-page comics will be launched globally by DC Comics.

“I insisted on the relationship starting out as distrust between both sides of superheroes,” Al-Mutawa said. The characters will realize that their mutual suspicions empower the real nemesis. “It will only be through trust that the bad guys are going to be beaten.”

The 99 is marketed in various ways around the world.

In Kuwait, the comic is competitive in traditional newsstand sales against Western counterparts such as Spider-Man. Issues can also be purchased at the Web site, and in 2007 The 99 became available to mobile phone users through UCLICK. In 2009, The 99 Village Theme Park opened in Kuwait; it features 20 rides.

A more recent business venture of Al-Mutawa’s in Kuwait continues his legacy of entrepreneurship. In 2009, he and the late Jaafar Behbehani established the Soor Center for Cognitive and Behavioral Psychotherapy.

“In the 15 years that I knew him, he had been trying to change the landscape in Kuwait to have proper supervision on the therapists,” Al-Mutawa said. He said many therapists in Kuwait are untrained and regulated by the Ministry of Commerce, not the Ministry of Health.

Soor Center therapists are licensed from their home countries and have seen 800 patients in its first year of operation. Prices are competitive with those of unlicensed therapists, and free services are extended when needed.

It raises the bar on mental health services in the country,” Al-Mutawa said.

While on the surface the Soor Center and The 99 appear unrelated, Al-Mutawa said there is a strong tie when it comes to people understanding themselves and each other.

A veteran attendee of business forums around the world, Al-Mutawa is looking forward to networking at the Presidential Summit on Entrepreneurship in Washington April 26–27.

“For me, those places always end with amazing connections, people I would not have met otherwise,” he said. “I get to tell my story and I see people thinking about how they may be in a position to help me.”