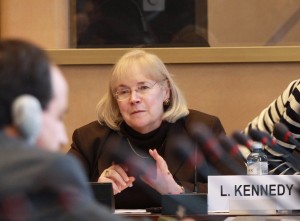 It is a pleasure to be with you today, and I would like to thank UNIDIR and its Director, Theresa Hitchens, for convening this valuable annual conference on space security. I would also like to thank Ambassador Arevalo, the chair of COPUOS, for continuing that organization’s participation in this event and its cooperation with the CD; having personally worked with COPUOS when I was posted as the Deputy of the U.S. Mission to the UN in Vienna, I know of their important contributions to this field.

I am grateful for the opportunity today to provide an update from the United States on our ongoing space policy review as well as our perspective on the various challenges we face as space becomes an increasingly congested and interdependent domain. We have just passed the third anniversary of the Chinese direct-ascent anti-satellite test in space as well as the one-year anniversary since the collision between an Iridium communications satellite and an inactive Russian military satellite. These events and others highlight the emerging challenges in outer space, and the need for the United States to work closely with other nations to further the interests of peace and security in outer space.

As many of you are aware, the Obama Administration is currently in the process of reviewing U.S. National Space Policy. One key element of this review is an evaluation of the range of approaches for enhancing the protection of critical government and commercial space assets against “all hazards” – including those posed by the natural environment as well as debris and intentional threats. Another key element of our review includes an assessment of options for greater international cooperation in space.

The U.S. review of space cooperation includes “blank slate” analyses of options in several areas, including:

• The safe and responsible use of space. The United States is reviewing a range of options – including the feasibility of equitable and effectively verifiable arms control measures, “Codes of Conduct,” and other transparency and confidence-building measures which support the interests of the United States, its allies, and all spacefaring nations;

• The development of common international arrangements to prevent the transfer of dual-use space capabilities to unauthorized destinations;

• Expanded cooperation with allies and partners to enhance shared security interests; and

• Enhanced cooperation with established and emerging spacefaring nations on the peaceful exploration and use of outer space for civil and commercial applications.

It is premature to predict the specific conclusions of our policy review. However, a recent statement by the U.S. delegation to the United Nations General Assembly clearly re-iterates enduring U.S. support for a number of long-standing principles, including those in the 1967 Outer Space Treaty, which provides the fundamental guidelines required for the free access to, and use of, outer space by all nations for peaceful purposes.

These principles, which are shared by our friends and allies around the world, serve as the foundation for international cooperation between, and among, all nations. Such cooperation is essential today more than ever as space evolves into an increasingly congested and interdependent domain. This evolution has created the need for effective transparency regarding the intentions and activities of all spacefaring nations as well as awareness of potential hazards to spaceflight safety.

So why do we consider the environment of space an increasingly congested domain? As technology and applications have advanced over the past 47 years, there are now over 21,000 man-made objects in various Earth orbits, including approximately 1,000 active satellites.

For decades, a number of satellite operators employed a “big sky theory,” taking the calculated risk that the immensity of outer space meant that the probability of a collision was extremely low. However, attitudes quickly changed last year, when a privately-operated Iridium communications satellite collided on February 10, 2009, with an inactive Russian military satellite. In addition to the direct economic impact resulting from a loss of capabilities, the debris generated from such collisions adds to the overall level of hazard in low Earth orbit.

As a leading spacefaring nation, the United States takes these issues very seriously. The United States has been, and will continue to be, a leader in identifying potential hazards and is pursuing new initiatives to preserve safety of flight for both human and robotic space missions.

In particular, the February 2009 collision highlights the need to improve shared space situational awareness. As part of an effort to prevent future collisions, the United States has improved its capacity to track objects in space as well as its capability to predict potential close satellite approaches that might pose a hazard to active spacecraft. I am pleased to report that as of December 2009, the Joint Space Operations Center at Vandenberg Air Force Base, California, routinely screens all active satellites against every object in the satellite catalogue to identify close approaches. The United States also provides notification to other government and commercial satellite operators when U.S. space analysts assess that an operator’s satellite is predicted to pass within a close distance of another spacecraft or space debris.

To help assist in this process, the U.S. Department of State is working closely with U.S. Strategic Command to facilitate prompt notifications of potential hazards to the governments of all spacefaring nations as well as to commercial operators. In establishing procedures for hazard notifications, the U.S. Government has gained a new appreciation for the challenges of space operations in the early 21st Century.

Why do we consider space an increasingly multi-faceted—as well as interdependent – domain? One reason is the expanding range of private companies and public-private partnerships that compete in the global marketplace by offering new products and services provided by increasingly capable satellites. In several years, these firms will likely be joined by commercial ventures offering space logistics support and even space tourism. Another reason is at the operational level, where some leading commercial satellite communications service providers already operate fleets of spacecraft controlled from mission control centers located in several countries with transponders operating on radio frequencies licensed by several different foreign governments.

In response to these challenges, the United States Government is taking pragmatic steps to improve communications with all satellite operators. The U.S. is currently working to establish specific points of contacts within other governments so that the Joint Space Operations Center can make notifications of potential close approaches between satellites on an around-the-clock basis. Our efforts to ensure on-going communication between operators will allow for an even more timely exchange of information, thus potentially preventing future collisions in space. In addition, these efforts ensure that collisions and other unforeseen incidents involving space activities do not become a cause for misinterpretation or miscalculation.

The United States was in communication with the Russian Federation promptly following the February 2009 collision, which was itself a demonstration of a valuable transparency and confidence-building measure (TCBM).

Additionally, four months after the collision, experts from the United States and the Russian Federation met in Vienna to discuss the incident and to discuss the opportunity for implementing a range of TCBMs. U.S. experts look forward to continued diplomatic and military space exchanges with Russia on spaceflight safety and TCBMs in the coming months. Concrete actions – such as dialogue on national security space policies and strategies, expert visits to military satellite flight control centers, and discussions on mechanisms for exchanges of information on natural and debris hazards – can help raise practical cooperation to a new level.

The United States also delivered a presentation to the 52nd session of the UN Committee on the Peaceful Uses of Outer Space (COPUOS) last June, which noted that the Iridium-Cosmos collision serves as an important reminder of the need for international cooperation with other spacefaring nations on measures to ensure the long-term sustainability of operations in the space environment.

The United States is participating in a multi-year study of “long-term sustainability of space activities” within the Scientific and Technical Committee of the COPUOS. This effort will examine the feasibility of voluntary “best practice guidelines” to help reduce operational risks to all space systems. This study will serve as a valuable opportunity for cooperation with established and emerging members of the spacefaring community and with the private sector to enhance spaceflight safety and preserve the space environment for future generations.

As space becomes increasingly congested and interdependent, there is a greater need for effective transparency regarding the intentions and activities of all spacefaring nations as well as awareness of potential hazards to spaceflight safety. A first step to reducing possible misinterpretation of, and increasing transparency into, other nation’s actions is through bilateral and multilateral transparency and confidence-building measures. The United States believes that bilateral TCBMs if agreed, implemented, and demonstrated to be useful, such as those currently under discussion with Russia, could potentially also be used with other spacefaring nations on either a bilateral or multilateral basis. As a result, the United States will continue to play a leading role in advancing TCBMs for national security as well as other related space activities.

Over the past two years, the United States has had fruitful and forthright exchanges with European experts regarding the European Union’s proposal for a “Code of Conduct for Outer Space Activities.” Looking ahead, the United States will continue to work with the European Union and other like-minded nations in efforts to advance voluntary and pragmatic TCBMs that are acceptable to the greatest number of countries.

To conclude, continued adherence to long-standing space policy principles, improved protection of critical and increasingly interdependent government and commercial space infrastructures, expanded international space cooperation, and improved space situational awareness through improved data sharing and new transparency and confidence-building measures can serve not only the national interests of the United States, but also the interests of all spacefaring nations. The United States looks forward to participating in exchanges and learning from academic and non-governmental experts such as the participants in today’s conference. Thank you for your time and attention.