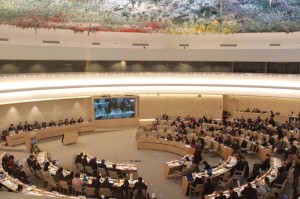 Over the course of the last year, fueled by our President’s commitment to engage actively and sincerely in this Council, my government has sought to build common ground, to overcome the differences that have defined this debate, and to make progress on the many imperatives that we share in common. We share a deep concern about discrimination, the targeting and ridiculing of individuals based on their religion, and interreligious violence. We share concerns about restrictions on places of worship and on religious attire. We share concerns about actions that willfully exploit tension or perpetuate negative stereotypes. We strongly believe that our shared concerns can form the basis of a new approach that could command consensus and demonstrate the potential of this body to address global problems. For this reason, we have traveled around the globe to articulate this new vision to address what we view as the root concerns behind this resolution.

We recognize, and deeply respect, that religion is a key source of identity and a powerful mobilizing force around the world. It is the duty of all governments to protect the ability of every individual to profess and practice his or her own faith.

We have also seen first hand the discrimination and violence that can be exacerbated by intolerance and fear of persons with different religious faiths. It is incumbent upon governments to model respect and welcome diversity of belief.

We strongly believe that governments have the tools to address intolerance, and that these include a combination of robust legal protections against discrimination and hate crimes, proactive government outreach, inter-religious efforts, education, and the vigorous defense of freedom of religion and expression. Respectful societies are built by individuals on the basis of open dialogue. When held up to the bright light of public scrutiny, hateful ideas are shown for what they are – lacking merit, and based on fear and ignorance.

We have a good deal to learn from one another. There are numerous examples of diverse communities living in peace in all regions of the world. Our conversation should focus on how to build mutual respect, but in doing so, we should not lose sight of our goal to realize universal human rights for all members of all religious communities as rights are held by individuals, not by governments, institutions, or religions.

The issues of intolerance, violence, and expression are squarely on the table, and have provoked debate on how to address our differences. Yet at this point, with great respect, we assert that the defamation resolution has become an instrument of division. It has failed to galvanize international support for real solutions that would improve the lives of people on the ground.

The United States will vote against this resolution because we view it as an ineffective way to address these concerns. We cannot agree that prohibiting speech is the way to promote tolerance, and because we continue to see the “defamation of religions” concept used to justify censorship, criminalization, and in some cases violent assaults and deaths of political, racial, and religious minorities around the world. Contrary to the intentions of most Member States, governments are likely to abuse the rights of individuals in the name of this resolution, and in the name of the Human Rights Council. We are deeply committed to addressing concerns of intolerance and discrimination and are eager to work with the cosponsors and the rest of this body to address the root causes behind the resolution in the spirit of consensus. Until then, however, we urge others to join us in voting no.