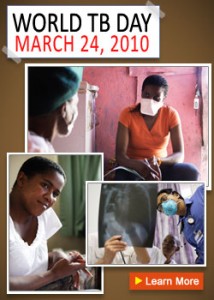 On the Move Against Tuberculosis – Innovate to Accelerate Action

World TB Day 2010, March 24, is focused on individuals around the world who have found new ways to stop TB and can serve as an inspiration to others. The idea is to recognize people who have introduced a variety of innovations in a variety of settings. This year’s theme of Innovation speaks to the need for a new way forward.

In 2008, U.S. Congress passed the Tom Lantos and Henry J. Hyde United States Global Leadership Against HIV/AIDS, Tuberculosis, and Malaria Reauthorization Act, supporting an increase in TB funding over a five-year period. The Act requests the development of a U.S. Government (USG) global TB strategy. In May 2009, President Obama announced the Global Health Initiative (GHI), which adopts an integrated approach to fighting diseases, improving health, and strengthening health systems. The TB strategy describes how the USG will contribute to the goals to control TB, which are included in the Lantos-Hyde Reauthorization Act, as part of the broader GHI. The USG TB strategy was developed in consultation with all relevant USG partners including USAID, Centers for Disease Control and Prevention and the National Institutes of Health within the U.S. Department of Health and Human Services, U.S. Department of Defense, and the Office of the U.S. Global AIDS Coordinator.

USAID Partnerships in the Fight Against MDR and XDR-TB
USAID works in coordination with the Lilly MDR-TB Partnership (www.LillyMDR-TB.com) to improve treatment adherence for MDR-TB patients in India, Kazakhstan, and South Africa. Both USAID and Lilly support the International Federation of the Red Cross local country chapters to help patients during their lengthy regimen. Red Cross “Red Crescent” nurses and volunteers provide psychological counseling, peer support, food and hygiene kits, and transportation vouchers. These incentives encourage the most vulnerable patients to complete treatment and prevent transmission of drug-resistant TB.