Explanation of Vote on Resolutions Related to Israel and the Occupied territories
By U.S. Mission Geneva
5 MINUTE READ 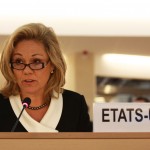 The United States is deeply concerned about the human suffering of the Palestinian and Israeli peoples resulting from the ongoing Arab-Israeli conflict. As our President acknowledged in Cairo in June, 2009, the only resolution to this conflict is for the aspirations of both sides to be met through two states, where Israelis and Palestinians live side by side, in peace and security. To achieve that end, there is no substitute for direct negotiations between the parties leading to a peace agreement and the creation of a Palestinian state. We should all be working to advance the cause of peace – not to hinder it.

We remain committed to an outcome which ends the conflict and reconciles the Palestinian goal of an independent and viable state, based on the 1967 lines, with agreed swaps, and the Israeli goal of a Jewish state with secure and recognized borders that reflect subsequent developments and meet Israeli security requirements. To achieve a real, lasting peace, both the Palestinians and the Israelis must take meaningful steps. Israel must take steps to end settlement activity, by upholding commitments it has made. The United States holds a clear position on this subject: We do not accept the legitimacy of continued Israeli settlements. Israel should stop settlement activity and dismantle outposts. Israel should further ease access and movement, and facilitate economic growth in the West Bank. We also continue to urge the Israeli government to increase both the quantity and scope of goods entering and exiting Gaza to improve the difficult humanitarian situation of the people of Gaza. The Palestinians must also take steps to ensure a safe and secure Israel, by continuing efforts on security, reform of governance institutions, and ending incitement to violence. The President has made the U.S. view clear: the status quo is not sustainable for Israelis or Palestinians. As Vice President Biden recently stated, “To end this historic conflict, both sides must be historically bold.”

In light of our overarching goals, we are deeply troubled to once again be presented with a slate of resolutions so replete with controversial elements and one-sided references that they shed no light and offer no redress for the real challenges of the region. The Council is too often exploited as a platform from which to single out Israel, which undermines its credibility. The United States strongly encourages the Council to seek an alternative to highly politicized resolutions and a permanent agenda item focused on one country. The human rights record of all states should be addressed under a robust common rubric. Moreover, consistent with our dedication to a universal application of international human rights, we urge both parties to examine their own human rights records and take steps to bring about improvements.

As members of the Human Rights Council, we all share a responsibility to promote and protect human rights; it should also be our role to help move the parties to peace. The United States works continuously to support the social and economic development as well as the legitimate political aspirations of the Palestinian people in an effort to lay the foundation for the creation of a strong, responsible, and viable Palestinian state. To this end, we continue to provide substantial diplomatic support and significant financial support to the Palestinian Authority. The United States is also the largest single country donor to the UN Relief and Works Agency for Palestine Refugees in the Near East (UNRWA), which provides critical humanitarian services to Palestinian refugees. The United States also supports programs designed to promote democracy and human rights.

Peaceful resolution of the conflict is in Israel’s interest, the Palestinians’ interest, the region’s interest, and the world’s interest. The best way to achieve this is by supporting and encouraging continuing talks between the two parties, not through divisive resolutions. We believe that through good-faith negotiations, the parties can mutually agree on an outcome that ends the conflict and reconciles the Palestinian goal of an independent and viable state with the Israeli goal of a secure state. Our commitment to achieving a solution with two states living side-by-side in peace is unwavering.

For these reasons, we call for a vote on this resolution and urge other Members to join us in voting no.