Ambassador Laura Kennedy: U.S. is Eager for the CD to Again Make an Active Contribution to Disarmament
By U.S. Mission Geneva
9 MINUTE READ 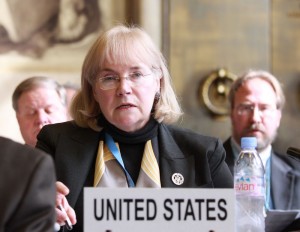 Statement to the Conference on Disarmament

Representative of the United States of America

It is an honor to join you today, as the new Permanent Representative of the United States of America to the Conference on Disarmament. Let me assure you of my full support and cooperation in the work of the Conference and congratulate our new President on his responsibilities. I look forward to working with all of you and hope to call upon you individually as your schedules allow.

I and my government are eager for this Conference to again make an active contribution to disarmament. The CD can and should be at the forefront, as President Obama said earlier this month, of “stopping the spread of nuclear weapons and seeking a world without them.”

The United States will continue to reduce significantly our nuclear arsenal. We welcome the steps taken in the same direction by other states with nuclear weapons.

Our forthcoming Nuclear Posture Review will further reduce the number and role of nuclear weapons in our national security strategy.

It is time to begin the long overdue, serious work that is needed for negotiation on a treaty to end the production of fissile material for use in nuclear weapons. Last year, we welcomed this Conference’s adoption of CD/1864, a balanced and comprehensive consensus program of work that would allow for the commencement of such negotiations. We regret that a small minority blocked implementation of that program, causing further delay.

In Prague last April, President Obama outlined an agenda for international efforts to confront nuclear dangers worldwide. President Obama said that the United States seeks the peace and security of a world without nuclear weapons, and committed the United States to pursue concrete steps toward that end. He identified a treaty to ban the production of fissile material for nuclear weapons – a Fissile Material Cutoff Treaty or FMCT – as one of those steps. The United States agrees with the vast majority of members of this Conference that FMCT negotiations are long overdue and should be the top negotiating priority for this body.

As President Obama made clear in Prague, confronting the nuclear danger requires concerted efforts on all three fronts: disarmament, nonproliferation, and nuclear security. No country – none of us – is immune from these dangers, and all of us have a responsibility to work together to address them.

A Fissile Material Cutoff Treaty has long been one of the key goals of multilateral arms control. The 1995 Shannon Mandate calls for negotiation of a treaty to ban production of fissile material for nuclear weapons or other nuclear explosive devices. This treaty should be “nondiscriminatory, multilateral, and internationally and effectively verifiable.” Such a treaty could cap stocks of fissile material available for use in nuclear weapons, and thereby limit the potential number of nuclear weapons in the world.

A cutoff would provide a foundation for future disarmament efforts. Before reducing arms, we have to stop increasing them. Article VI of the Non-Proliferation Treaty recognizes this logic, calling for negotiations first on an end to the nuclear arms race, second on nuclear disarmament, and third on general and complete disarmament.

We have already achieved much on the disarmament front, though we have much yet to do. The Cold War arms race is over. According to published estimates, the number of warheads in the world has dropped from a peak of over 70,000 to roughly 25,000 now.

Although an FMCT is now no longer needed to halt the Cold War arms race, it would consolidate the arms control gains made since the end of the Cold War.

But in some areas, nuclear stockpiles continue to grow, with the concomitant specter of destabilizing regional nuclear arms races. An FMCT could help prevent that and would promote transparency and stability through international verification of fissile material production.

Looking further into the future toward the goal of reducing nuclear stockpiles to ever lower numbers – and eventually to zero – controls on fissile material are likely to play an increasingly important role. To achieve such reductions will likely require a much greater degree of mutual confidence among the relevant states. A verifiable FMCT will be an important foundation for that confidence.

By improving controls on fissile materials worldwide, an FMCT would also help prevent terrorists from gaining access to those materials. One way to make sure that fissile material does not fall into the wrong hands is to ensure that it is fully accounted for. By addressing the mechanisms to account for this material, an FMCT would contribute to security against nuclear terrorism.

The United States joins with the vast majority of members of the CD – and others who are not members of this body – in a shared conviction that there is a pressing need to strengthen controls on fissile material. Fissile material stockpiles represent a latent capability to produce nuclear weapons. Controls need to be strengthened systematically in order to build the confidence necessary to allow deep reductions in nuclear forces. As nuclear forces shrink, these controls become more important.

The United States will continue to do its part to address this need, and we hope this body, whose predecessors have produced a number of landmark treaties, will do its part. It has long been clear that negotiation of an FMCT will be difficult and that it will take years to complete. This makes it all the more urgent that we get started as soon as possible. Fifteen years of inaction is enough.

The United States is committed to working to make this longstanding collective ambition for a treaty to end fissile material production for weapons a reality. We welcome an active and open exchange of views and an early start to negotiations. We acknowledge and agree that the CD, as the premier multilateral disarmament negotiating body, should consider that all issues on its agenda could, at the proper time, lend themselves to “future negotiations” – as stated clearly in WP/559. We look forward to participating in substantive discussions on all of the CD’s “core issues” while we commence negotiations on a fissile material cutoff treaty.

Looking beyond the CD, let me note to what my country is doing to reduce nuclear weapons and constrain proliferation. We will be seeking the consent of the U.S. Senate for ratification of the Comprehensive Test Ban Treaty. We urge other states to complete their ratifications as well, especially those whose ratification is needed for entry into force of the CTBT. We will continue our moratorium on nuclear testing, as well as our long-standing moratorium on the production of fissile material for use in nuclear weapons. Our negotiators are hard at work with their counterparts from the Russian Federation to finish the follow-on treaty to START which will mandate significant cuts. We will also continue our global partnerships that seek to limit the proliferation of weapons of mass destruction and associated delivery systems.

In May, I will be joining many of you in New York as we seek to strengthen the Nuclear Non-Proliferation Treaty. That treaty, negotiated here, reminds us powerfully of what can be collectively achieved in the fair city of Geneva. It is the cornerstone of the nuclear nonproliferation regime, and its Article VI is our clarion call and commitment to nuclear disarmament.

This Conference will shortly recess. When Part II of our session begins, I hope that we will have agreement on our Program of Work and be able to turn our efforts to negotiations. You will have an active partner in the United States in that effort and full and substantive dialogue on the CD’s agenda.