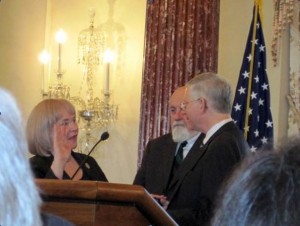 at the Swearing-In Ceremony for Ambassador Kennedy,

I would like to welcome all of our distinguished guests and Laura’s family.

I am pleased to swear in Laura Kennedy as our Ambassador to the Conference on Disarmament (CD), the world’s premier standing negotiating forum for multilateral arms control.

Laura is commencing her duties during a time when we are facing intense nuclear proliferation challenges.

But we also have real opportunities to make concrete and lasting progress that Laura will be a key leader in seizing.  The CD and its predecessors have negotiated a number of treaties central to our global security such as the Nonproliferation Treaty (NPT) and the Comprehensive Test Ban Treaty (CTBT).

Today we need to strengthen the global security architecture by negotiating a verified a Fissile Material Cut-Off Treaty or FMCT, to end the production of Fissile Material for use in nuclear weapons.  A Global FMCT would cap the size of existing nuclear arsenals and help reduce the risk that terrorists could gain access to stockpiles of fissile materials.  This is the priority mission that President Obama and I have asked Laura to undertake at the CD.

We have also asked Laura to join our effort in New York this May to conduct a successful NPT Review Conference that renews and strengthens the ‘grand bargain’ between disarmament, nonproliferation and peaceful uses to revitalize the global nuclear nonproliferation regime.  So we know Laura will be gainfully employed!

Laura’s long and distinguished Foreign Service career, including service as a Chief of Mission, Deputy Assistant Secretary of State, and Deputy Chief of the U.S. Mission to the UN in Vienna has prepared her well for this critical task.

Laura, thank you for taking on this important work for the American people, and my special thanks to John, Martin and Patrick for supporting Laura while she leaves home again for a new mission abroad.

Thank you Mr. Van Diepen  for your very kind remarks and thank you to Gladys Boluda , my old partner in crime from the Soviet desk, for officiating. And thanks to all of you for taking the time to share this occasion with me and my family. I’d like to specially acknowledge my distinguished predecessor at the CD and old friend, Amb. Rocca, and my last boss, Major General Steel, the Commandant of the National War College.  I have been lucky to be associated with two distinct but equally distinguished interagency programs, the National War College and the State Department’s own Senior Seminar.

It will be an honor indeed to represent President Obama, Secretary Clinton and this great nation at the Conference on Disarmament. As Vann said, this organization’ predecessors have produced major accords such as the NonProliferation Treaty whose 40th anniversary we celebrated this month. In more recent times, however, this body has spent more time on procedural wrangling rather than on the substance of the many security challenges that the international community faces today.

That is a pattern we and our partners hope to change — for example, by finding a way to negotiate a legally-binding prohibition on the production of fissile materials, the essential ingredients for nuclear weapons.  We are equally prepared to discuss the full range of other issues on the Conference’s agenda and examine opportunities to make real progress.

As I take up this post, I am fortunate to have the support  of the extraordinary “T” family, the Arms Control and International Security Bureau headed by our dynamic Undersecretary, Ellen Tauscher, who left a flourishing career in Congress to join us.   W all appreciate the desire of Secretary Clinton to rebuild the arms control function at State.

When I returned to the non-proliferation field this year, it was like an extended family reunion with many of the stars in this field happily back in harness. I am in awe of the talent in the ranks, at State and in our sister departments and in the academies and NGO’s.  We have all been energized by the bold agenda laid out in Prague by President Obama.

I have benefitted from the mentoring and friendship of many, many of you here today. I must single out Sharon Hardy, who shepherded me through the protracted confirmation process, Yvette Wong and her merry gang, especially Mike Foughty, and Cathy Lawrence’s EX team along with EUR’s Julie Stewart.  More broadly,  I am indebted to all my colleagues and friends in ISN and VCI bureaus.

As always, my family has been my mainstay. My beloved father, a captain in the Navy, was my original inspiration for a public service career.  For now, my husband John and our sons, Martin and Patrick, will be with me only in spirit and through the good offices of Skype while I’m in Geneva, so please keep an eye on them for me!

I’ve gone on way too long so let me close by saying bless you and go forth and drink green beer on St. Patrick’s Day!