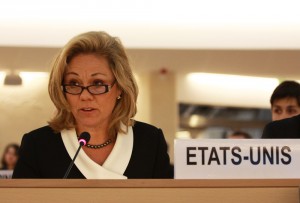 The United States appreciates the opportunity to take the floor on this agenda item. Regrettably, there are far too many examples in all regions of governments abusing human rights. Governments use arbitrary detention, arrest, and imprisonment to prevent people from exercising their universal human rights and fundamental freedoms, including those pertaining to expression, association, peaceful assembly, and religion. We addressed two situations earlier today and ask this Council to stand with the victims of human rights abuses and consider the following situations in its deliberations:

As we consider how to improve the Council’s work through the 2011 review, we want to ensure that the Council addresses all serious human rights situations, and that it works hand-in-hand with countries that are genuinely willing to improve their human rights performance. We hope we can work together to identify a broad range of tools to address human rights issues specific to countries, from the discussion and provision of technical assistance, to exploration of thematic issues in a country by country context, to resolutions calling governments to account for specific abuses. I personally look forward to joining you all in these efforts.