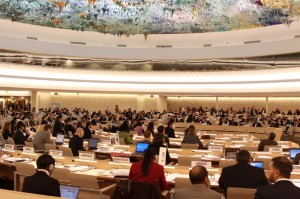 Thank you, Mr. President. I also thank both of the rapporteurs for their presentations.

The United States wishes to commend the Special Rapporteur on Freedom of Religion or Belief, Ms. Asma Jahangir, for her extraordinary efforts to promote freedom of religion for all people. The United States appreciates the Special Rapporteur’s focus on early warning signs and on concrete, proactive, and action-oriented steps that all sectors of society can take to combat discrimination and violence based on religion or belief.

Indeed, it is a government’s responsibility to promote an environment free of persecution or prejudice. Governments can and should take an active role in promoting tolerance and respect for diversity. We have repeatedly stated our resolve to combat intolerance, discrimination and hate crimes. We need to do a better job of putting those words into action. We remain concerned by the trend of governments putting restrictions on places of worship, religious attire, the use of minority languages, or peaceful cultural expression; and actions by political leadership that exploit ethnic tensions or reiterate unhelpful stereotypes. We remain concerned about police raids and arrests for peaceful religious activity and religious groups facing difficulties in registration.

We believe that states have the tools to fight discrimination and violence. States should robustly enforce anti-discrimination laws as well as laws to prevent and punish violent hate crimes. States should encourage interfaith dialogue and cooperation, should enhance training and education, should proactively reach out to members of minority communities, and should engage in rigorous tracking and dissemination of data on violent hate crimes. These measures have proven effective where implemented, in countries around the world.

In contrast, measures that propose restrictions on freedom of expression in the name of tolerance have not been effective in countering violence and discrimination and have instead served to exacerbate inter-religious tension and often violate fundamental freedoms of religion and expression.

The United States also welcomes the report of the Special Rapporteur on Human Rights Defenders, Ms. Margaret Sekaggya, who also refers in her report to the importance of early warning of deteriorating operating environments for human rights defenders, and provides detail on civil society efforts to this end. The United States endorses this idea for the support and protection of human rights defenders. We would be interested to learn more from the Special Rapporteur on what she thinks an effective early warning system would look like and what it would aim to achieve.

As the Special Rapporteur rightly points out in her report, effectively protecting the activities of human rights defenders and civil society activists can only redound positively to states and to society. Civil society activists and human rights defenders play the crucial role of amplifying the voices of victims, spotlighting human rights concerns, and pressing for redress of violations. It behooves us all to strengthen their ability to act. Despite the crucial role such defenders and activists play in any vibrant democracy, these courageous men and women are often subjected to harassment, persecution, imprisonment, and even death as they try to exercise their fundamental freedoms of expression and association and try to shine a light on human rights violations. We particularly appreciate the reference made to human rights defenders in the lesbian, gay, bisexual, and transgender community.