U.S. Notification to the Secretariat of the UN Framework Convention on Climate Change 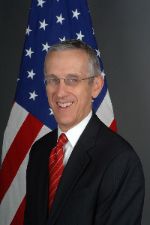 of its Copenhagen Accord association and its Emissions Reduction Target

“The United States today officially announced its desire to associate with the Copenhagen Accord and submitted its emissions reduction target to the Secretariat of the United Nations Framework Convention on Climate Change. The U.S. submission reflects President Obama’s continued commitment to meeting the climate change and clean energy challenge through robust domestic and international action that will strengthen our economy, enhance our national security and protect our environment.

The Copenhagen Accord- the product of a collaborative effort by developed and developing countries- represents an important step forward by the global community to address climate change and mitigate its impacts.

Its critical provisions include undertakings to reduce emissions by all major economies, whether developed or developing; measures to ensure transparency in the implementation of those undertakings; and financing and technology support, targeted especially to the poorest and most vulnerable developing nations.

We expect that all major economies will honor their agreement in Copenhagen to submit their mitigation targets or actions as provided in the Accord. And we urge all other countries to convey to the Secretariat their desire to associate themselves with the Accord so that its landmark provisions can be implemented.

The United States is committed to working with our partners around the world to make the Accord operational and to continue the effort to build a strong, effective, science-based, global regime to combat the profound threat of climate change.”