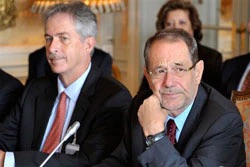 SENIOR U.S. OFFICIAL: Let me start off by recapping the events of the day; and offer a few main impressions; and then open up to your questions.

We spent a total of about 7.5 hours today in a variety of meetings with the Iranians. We started the morning plenary session a little after 10:00 o’clock. That went on for about three hours. Dr. Solana kicked off the meeting as the leader of the 5+1 delegation; the U.S. spoke after Solana; and was then followed by Dr. Jalili, the head of the Iranian delegation and the other members of the 5+1 group, the other political directors.

We then broke for an informal lunch. During this break we had the opportunity to have about a 45 minute one-on-one sidebar discussion with Jalili. It was in a small sitting room next to the main conference room in which we were meeting. Over the next several hours after this lunch break began there were a series of discussions. It was a pretty free-flowing event, both amongst the 5+1 members and with the Iranians.

We held a second short afternoon plenary session, then ended today’s discussions at about 5:30. Solana and Jalili held press conferences which all of you have heard.

Let me touch on a few of the main issues and themes today, at least from our perspective. Solana’s remarks at the press conference captured many of the elements of today’s dialogue. I’d say that four themes emerged: the unity of the 5+1 group, focus on the nuclear issue, the urgency of this intensive or what we hope will be an intensive diplomatic process, and the need for Iran to take practical steps.

During the plenary sessions we had a lengthy conversation about the nuclear issue. We reemphasized our position that Iran has rights, but with those rights come responsibilities. We laid out our view that we look to Iran to take concrete steps to address the international community’s concerns by beginning to create confidence in Iran’s nuclear intentions and establish transparency in its program. We stressed our serious concern about the revelation of the clandestine enrichment plant near Qom and underscored the importance of full cooperation with the IAEA and having an IAEA inspection, as Solana said publicly, within the next couple of weeks. I understand that Mohammed ElBaradei, the Director General of the IAEA is going to be in Tehran this weekend to try to iron out the details.

During the plenary and on the margins and during our sidebar discussion, which I can come back to in a minute, we discussed the question of the Tehran research reactor. And maybe a little background would be helpful. This is a research reactor which has been in operation in Tehran for decades, producing medical isotopes under strict IAEA safeguards. The last supply of fuel for this reactor, which is at roughly 19.75 percent LEU, was supplied by the Argentine government in the early 1990s and it’s going to run out in roughly the next year, year and a half.

Iran came to the IAEA a few months ago with the request to replace this supply. The IAEA consulted us and some others, some other members, and to make a long story short the United States and Russia joined together in a proposal to the IAEA which the IAEA subsequently conveyed as a response to the Iranians, to use Iran’s own LEU stockpile as the basis, as the feedstock for the reactor fuel that’s required.

This would then entail taking its LEU, which is enriched to about 3.5 percent, enriching it up to 19.75 percent in Russia, which the Russians have now publicly confirmed that they’re prepared to do, and then fabricating that into fuel assemblies which can be used at this safeguarded reactor, and the French have now confirmed their willingness to play that last role. Those are the basic details involved in the proposal. The potential advantage of this, if it’s implemented, is that it would significantly reduce Iran’s LEU stockpile which itself is a source of anxiety in the Middle East and elsewhere.

During our talks today the Iranians agreed to accept this proposal in principle, and there’s to be a meeting in Vienna on the 18th of October, led by IAEA experts, to try to work out the details.

So again, at least in our view, the research reactor proposal made by the IAEA would be a positive interim step to help build confidence so that we’d have more diplomatic space to pursue Iran’s compliance with its obligations under the Security Council Resolutions, the NPT and the IAEA, and to tackle the more fundamental question of Iran’s nuclear program.

I’m sorry to be so long-winded, but I’ll add a couple of comments on the sidebar conversation with the Iranians.

This was a direct and candid discussion. We reinforced the points that we had made in the plenary session, that all of us have made on our concerns about the nuclear program, stressed again the need for the Iranians to take concrete and practical steps consistent with its international obligations to build confidence, and to demonstrate that its program is exclusively peaceful in nature. While the focus of this bilateral conversation was on the nuclear program, there was also a frank exchange on some other issues, including human rights.

So broadly speaking, I think the significance of today was that Iran, having refused to talk about its nuclear program since July of 2008, engaged on that program today with the United States as a full participant. We began a discussion. I don’t think anyone expected, I said this to some of you yesterday, that no one expected that one day would allow us to resolve international concerns about Iran’s nuclear program, but I think today was a first step in what is bound to be a difficult process.

We are in what we hope is an intensive diplomatic phase now. It will not be open ended. We will actively pursue the implementation of the practical steps that Solana has laid out. Why don’t I stop there.